Only of interest to people playing Spirit of the Century at the moment.

Aspect Summary:
Just a girl
Loves her books
A fool for love
From an unlikely quarter
Remove the keystone
The Library of Am-Tuat
Money makes the world go round
The seal of Sheba
Trusting soul
Politeness is its own reward

Younger child of a posh family. Wealthy parents were loving but slightly distant - they petted her and praised her but never really understood her or tried to. Their energy was devoted to her charming older brother Brandon, heir to the family name. Eva buried herself in her studies, especially in learning as many different foreign languages as possible, imagining that someday she might travel the world. Curious, explorer nature.

Just a girl
Loves her books

The war disrupted social life as even the upper-class men were called away to serve. Eva was romanced by Francis Adler, a gentleman supposedly home on medical leave, who was very interested in her clever mind and linguistic skills. One day she discovered that he was using her as a codebreaker to decipher secrets stolen from her government. He locked the hysterical Eva in his apartment to keep her from telling anyone what she knew, but with the help of his cat she was able to escape and reveal his spying to the authorities (and/or century club), disrupting his scheme.

A fool for love
From an unlikely quarter

Eva Langley and the Netherworld Gate

A madman was murdering cats in London. Guided by her feline friends, Eva tracked him to his lair and broke in, poring over his occult library to work out what he was up to. She was captured by Am-Tuat, who chained her up to witness his final triumph...

Am-Tuat used the cat call for the last time, intending to call the last cat needed to finish his ritual. Instead of a moggy, he got Thema the cheetah, and hot on her trail, Amelia Blaze. The distraction that this caused bought Eva the time needed to adjust the symbols, and as the magic went out of control Am-Tuat's fate was sealed when Amelia kicked him into the gate.

Remove the keystone
The Library of Am-Tuat

Guest Star: Miss Blaze in the return to the Lost Plateau

After meeting Amelia Blaze during the incident with Am-Tuat, Eva put up the money to finance Amelia's trip back to the site of the crash. Her linguistic skills were useful in finding out the natives' motivations. Once they had routed Apperly, she discovered among his possessions the carved stone seal of the ancient Queen of Sheba.

Money makes the world go round
The seal of Sheba

Guest Star: Doctor Westfield and the Ressurected Man in "Horror on the Nile!"

At the beginning of their African trip, Eva stopped in Cairo to take in some of the sights of Egypt and do a bit of shopping. She found it difficult to refuse the salesmen who kept offering her treasures, but when one tried to get her to sign up for a pleasure cruise down the Nile, she was reluctantly forced to decline so as not to disrupt her plans with Amelia. She then encountered a pair of British travelers, Harry Westfield and his invalid father. After becoming acquainted, she suggested they take the pleasure cruise she'd had to turn down - Westfield Sr. was clearly a bit unwell, and they could use some relaxation.

Trusting soul
Politeness is its own reward
No comments:

Email ThisBlogThis!Share to TwitterShare to FacebookShare to Pinterest
Labels: tabletop

Apparently I was very fond of 'er' that time. 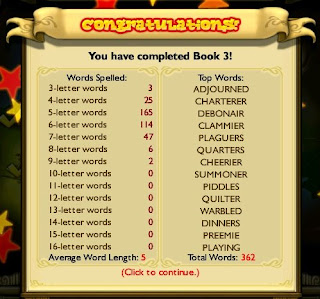 Some words which I have successfully used in Bookworm Adventures and then had to look up because I had no idea what they meant:

Some words which the game stubbornly refuses to accept

In other words, Bookworm Adventures 2 is out. I don't own it yet. Why? Well, you remember my Great Annoyance with the previous one? While I've heard rumors that this game will allow you to replay earlier levels without having to start over (thank you!), the popcap site is STILL charging brits and europeans far more than Americans. So, I'll wait.
No comments:

(I can always hope that saying that enough will jam up their searches a bit. Jerks. Play zombies instead!)

second verse, same as the first

, a DS game also featuring four girls and rhythm gameplay, except this time they're supposed to be a band instead of figure skaters.

Oh, and apparently they figured out that the anime version of their graphics looked much better, so even the English version gets that now.

However, SOMEBODY in marketing appears to have screwed up, because most of the websites mentioning the game are displaying the screenshots for "Family Pirate Party" under the name of this game. (This includes gamespy and gamespot). Actual screenshots available at the publisher's website.
No comments:

a toy, not a game

It is also rather cringe-inducing that while exhorting you to commit "acts of lust" to win, the rules also state:

Judges reserve the right, in their sole and absolute discretion, to disqualify any Submissions that are inappropriate for any reason, including without limitation, for depicting or mentioning sex, violence, drugs, alcohol and/or inappropriate language.

On the bright side, the contest is open to women as well...
No comments:

first ending reached was 'great scientist'. Although as a transhumanist myself I think the character needed to get over some of his reluctance to upload!

The PC's relationships with other characters are kinda frustrating. I spent most of the game trying to get him to break up with Helen, yet despite destroying their relationship he still vaguely mumbled that he loved her every now and then... Without ever seeming to have any REASON for it. Other than, I suppose, sex.

But that's often a problem in relationship games, when the player and the character are at odds. More often the other way around, when you the player are trying to make the PC pursue a girl that the PC doesn't, by default, find very attractive.

I just wanted to make him tell her it was over, and move on. I'm not clear on why that was never an option... even when they finally broke up for good he was still bitter about it, despite clearly not being all that interested in her!
No comments:

is now available
No comments:

Bit of a mouthful, no? This is a japanese platformer, and it's not easy! There is a free demo to try out. However, you may need a bit of jgame knowhow to get it running smoothly. (Short explanation - Use microsoft's AppLocale set to Japanese to launch the exe, or it crashes when it reaches the menu screen. Also, standard jgame controls are arrow keys, Z, X, and sometimes C... but the game desc suggests a joytstick with six buttons is desired, so there's probably more keys than that in use.)

Eight girls have occupied various places around the sacred empire.
Can Spiritia stop the rampage of her friends?
The stage is headed to the demonic castle where the count waits...

This game is a 2D side scrolling action platformer.
The way to use the various weapons (magic) you can gain from defeating bosses is the key to the game's strategy.

Well, everyone knows Civony is a scam, right?
No comments:

the difference between me and you

is that when I see a newly-released game entitled 'Angel Cat Sugar', I'm actually interested.

Of course, I'm sure to be crushingly disappointed, but I can always imagine that someone will have dared to make something cute and also more entertaining than licking a battery.

(Looking it up, it appears to be Sanrio-related. Which means they're at least not *embarassed* to be making something cute. However, I also can't find so much as a single screenshot.... scratch that, here we go, but there's still no info on actual gameplay. Bad sign. And it's probably meant for toddlers.)
1 comment:

a bonus for the british

Apparently someone's making an action-RPG based on the Fighting Fantasy gamebooks.
No comments:

reasons why it's worth it to be a PC gamer

Just a big pile of stuff in here with links to tons of different games, commercial, indie, mods, and free.
No comments:

A very cool-looking freeware fighting game... if you can make enough sense of Japanese to be able to download and play it. I'm not really into vs-fighters, I just like to look at the sprites!

Atari has apparently released the source code of a bunch of old 7800 games for people to poke at.

homelessness - in the sims

Quite an interesting read, really.

Email ThisBlogThis!Share to TwitterShare to FacebookShare to Pinterest
Labels: Sim

They're going to make a movie... of Asteroids.

As opposed to today's games, there is no story line or fancy world-building mythology, so the studio would be creating a plot from scratch. Universal, however, is used to that development process, as it's in the middle of doing just that for several of the Hasbro board game properties it is translating to the big screen, such as "Battleship" and "Candyland."

Of course, I can think of various ways to make a movie out of Asteroids that could be vaguely cool. Candyland is a much more difficult subject.
No comments:

as seen on gamesetwatch:

Gamil Design filmed this stop-motion short at Kirby Derby -- an anything goes (so long as it's safe/appropriate) parade in Raleigh, North Carolina's Kirby St. -- using a pile of post-it notes to create the sprites.

The group says it created the 8’ tall, 12’ wide Donkey Kong at its office when the idea struck: "Once we took it outside and admired our work ... we noticed that the railings of our next door building looked just like a Donkey Kong set. Naturally we had to spend the whole next day creating all the characters for our first-ever stop motion animation movie."

Special one-day half-price sale. Fantasy turn-based-strategy with multiplayer and stuff. Not really my thing, but someone reading this might care. :)
No comments: 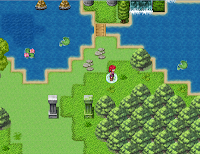 Seem to be a lot of these RPG Maker console-style games out around now, don't they? And this one's tiny (not even up to 640x480!) and purely keyboard-driven, no mouse.

So, what's so interesting about Deadly Sins?

The first thing you'll notice is the combat. 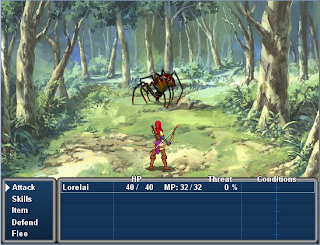 Not only is there a pretty backdrop, but there's also a big, non-chibi sprite for the player. And she *animates*! Attack with your bow and you'll actually see her draw an arrow and fire. Rare, for these little indie RPGs. (The monsters are not equally animated, though.)

The second thing you'll notice is the skills system. 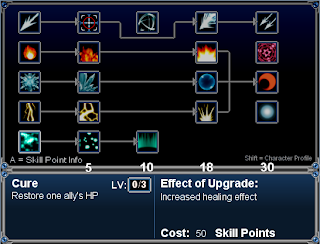 You have skill points, you can choose where to spend them, and you can see a bunch of available upcoming skills. Nice.

... It also helps that there's pretty music and fluent English. :)

If your interest is piqued, try the free demo.
(It's a bit of a big download because of the music.)
4 comments: