So, off topic for this blog really, but having finally seen the film I can muse about it.

I feel like the movie was kinda 'eh' but certainly fun and deserves better than to be carted around as an enormous flop... of course, I liked Waterworld, so I may have a taste for enormous flops.

The graphics were awesome (and it was probably even more fun to see on a big screen) and some of the characters were pretty cool. However:

Many characters names I never figured out even by the end. Is this bad? Dunno. All the weird names are easier to get the hang of in text... so when I was looking actors up on imdb later for many characters I had no clue who was who. Not really important though, I guess.

I was not at all sold on the romance. It just didn't click for me. They seemed more like friends, the chemistry wasn't there. The tragic backstory did not feel well-resolved, and the Big Moment which was supposed to show his change of heart just confused me - the parallel was not as clear as they seemed to think it was!

Dejah, while overall an okay character, was not well-served by the dialog. Combined with the massive power of the enemies (more on this later), her inability to articulate why marriage was such a terrible idea made her seem like a whiny brat. "I would do anything to save my people! Except kiss that man!" Sure, being forced into marriage sucks, but if it's being done as a political alliance you can turn this to potential advantage in the resulting union... or if the guy's enough of a bastard and you have planning time you can set him up for assassination. It really all depends on circumstances. Wearing a wedding dress does not have to mean your utter submission forever... unless it does in their culture, or the wedding is going to involve some sort of mind control, or you have Virgin Powers that will be irrevocably lost, or you strongly suspect your 'husband' will immediately kill you once he can claim your inheritance, or so on. All of these things would make a big difference! But she wasn't really able to voice much objection other than "I have a vague feeling that if I marry him the planet will be doomed!" which made her seem more like a bratty teenager than a brave rebel.

The bad guys. What the hell? First off, their power levels were WAY too high and WAY too inconsistent. They're everywhere, they see everything, they can evaporate thousands with a single wave of their hands... except when the climax happens and then suddenly they can only kill people really slowly or make blue glowing swords? I think I've complained elsewhere how inconsistent power levels destroy my ability to plan or predict and ruin my enjoyment of stories. I can't appreciate a clever plan if it's not a clever plan because it only works because the villains decide to not bother using their powers for no reason.

Also... the bad guys' plans make no sense at all, they just seem to be doing things for the lulz. "Have some power! Blow some shit up! But don't blow her up, you have to marry her first and then kill her. Why? Um... Because we said so." Why they don't simply murder everyone with their waves of blue power makes no sense. Why they don't simply kill John at the end makes no sense. Why they do almost anything makes no sense. They would have been far more interesting if they were much weaker and forced to do everything through subterfuge and subtle powers. If you revel in destruction but are far too weak to create destruction yourselves, then screwing around with warring cultures makes sense.

where did that come from

Apparently there's a PC version of scribblenauts now? Although their website didn't want to tell me it existed and was only pushing WiiU (not bloody likely considering the day one bricking) and 3DS (obviously no, not until they drop the region-lock) at me.

It's sad when people searching for pirate copies and thus tripping some of my flags do a better job of advertising than the actual sales team...
No comments:

IT KEEPS POKING ME

slowly picking up the attack patterns. got through to what may be the last stage but my thumbs were getting too tired to master the art of climbing via slingshot effect.

It's not actually HARD when you read the patterns right, but it takes long enough to get sore fingers.
No comments:

This is actually my first Castlevania game ever, although I'm familiar with the basic idea. My first life was soon wasted partly because this game is a little bad about feedback - maybe it's obvious if you've played previous games, but it wasn't that clear to me that all my attacks have costs of some kind. When I press a button that moments ago Did Something and now Does Nothing, I tend to stand there in confusion pressing the button over and over again trying to figure out WTF is wrong (is the game not registering my keypress or what?) But if the problem is actually that I'm out of X, pressing the button more is not going to help, and I'm going to be very quickly overwhelmed by critters.

Now that I'm aware of the attack gauge and the separate heart cost of unions, things make more sense.

And now I can experience GoddamnedBats firsthand! (The bats are not NEARLY as annoying as the things that try to eat my head.)
No comments:

many years late to the party

Okay, so this has been out for a long time but I was searching for relaxing games and discovered 'Auditorium', a strange little flash thing where you direct rays of light into targets in order to make pretty piano music. It is, indeed, soothing, while still being enough of a puzzle to satisfy my 'game' needs.

I took a screenshot but it's so pointless without the motion and the sound, you really should just go and look at the flash demo instead.
No comments:

a camera is a window of opportunity

So, wait. Apparently the new Xbox will be monitoring your game-playing and movie-watching so that it can refuse to let you do things if you have too many friends over?

You don't have a license for that party, do you, son?
No comments:

crowns have teeth you know

Now that the script is mostly (although not completely) in the can I'm taking time to poke around at interface bits, like the title screen and the CG gallery.

This art is still not final yet, I have a long time to go before this game is complete artwise...

There's a slight delay in the music because of where exactly it switches from splashscreen to official menu screen, and that particular track having a little bit of padding at the start, necessary for other uses in the game. I don't currently see any way to adjust the music more precisely than by simply listing a file for config.main_menu_music. Right now the delay sort of goes with the banner's appearance, so I'm not sure it's a terrible thing.

Should probably start poking at the jukebox after this. I personally don't like them but some people tend to want the option.
2 comments:

Tobari and the Night of the Curious Moon

Haven't seen one of these in a while! It's an old-school indie platformer... not the new super arty breed, but a cute Japanese thing. Well, originally Japanese. This version is fully English. Nothing amazingly special in the little bit I played of it, and the controls are kinda slidy, but if you like anime girls and cute things... 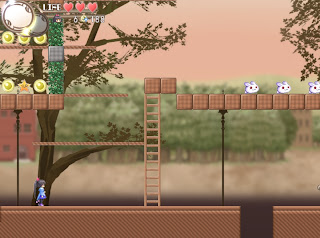 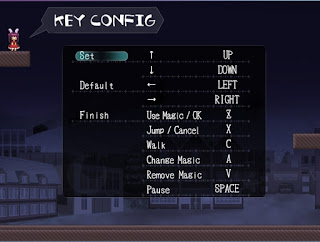 You go around whacking people with your magic staff. Some monsters will drop powerups. You can carry two powerups at a time and switch between them, or drop them to get back to your default or carry another.

And as I mentioned, free demo. (As usual, there are adult works elsewhere on DLsite, but this link is safe and leads to the non-adult part of the site.)