Apparently the Katawa Shoujo project is finally putting out a demo. 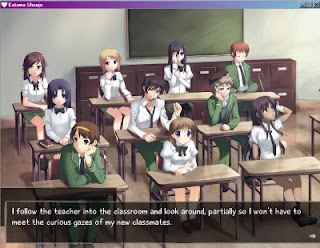 Are currently available to be played in a browser using only javascript. Neat.

go here to see
No comments:

I am linking this purely because of the name

(It's apparently a GirlxBoy romance/RPG, but as I do not have a Japanese PS2 and do not read Japanese the point's academic.)
No comments:

half-baked is better than none

While I don't think these ideas are really getting anywhere yet, the concept of drawing on your distant partner is a more interesting computer 'sex game' than most ideas I've heard lately...
No comments:

This weekend's promotion on Good Old Games is Fallout. 1+2+tactics. And soundtracks. And art/notes/etc. For $15. If you don't own this stuff, GO GET IT NOW. KTHX.
No comments:

Since another airline is trying to play the seatspace card that we joked about game designs for, I will comment:

In short, FLYING IS NOT COMFORTABLE. It's not fair to pin the blame solely on fat people.
No comments:

Is it possible to be addicted to video games such that they damage your life? Sure. But I would argue that the results presented in this article do not really offer much useful information.

First off, questionnaire-only data is notoriously inaccurate. People make rough estimations, forget things, provide the data they think the questioner is looking for, hide the data they think they should be ashamed of, etc. If someone asks you a 'simple' question like how many hours a week you play games, how likely are you to KNOW the correct answer, even if the answer actually is steady from week to week, which it probably isn't? And that's with adults. This study was surveying quite young kids.

But are the questions even meaningful? They suggest that kids' schoolwork and relationships may be suffering because they spend too much time playing games, but it's also a typical chicken-and-egg thing. A kid who *hates school* is probably more likely to blow off schoolwork in favor of games. A kid who is being bullied at school and getting into fights is, again, probably more likely to hide in her room and play games rather than hang out with friends she doesn't trust.

All the survey has really shown is that "Some kids play games a lot more than other kids do." Are some of them addicted? Maybe! But as of yet, the 'researchers' (and I doubt they deserve the dignity of that title) don't seem to have any idea of what addiction IS.
No comments:

aliens are stealing my sheep!

Apparently that little game I noticed last year is finally out...
No comments:

i am easily amused

While playing Shop-n-Spree, the Large Older Rich Gentleman came into the women's clothing department and requested every pink bikini I had. And hurry!

One can only imagine.
No comments:

Rich directed excellent indie urban drama Straight out of Brooklyn in the early 90s and not-so-excellent video game 187 Ride or Die in 2005, and Mathis settles the disputes of the lost and hopeless on syndicated TV. So the pairing is interesting, to say the least. The duo plan to make a Grand Theft Auto-style action game featuring prison rape.

“The main difference between our game and Grand Theft Auto is that players will have to deal with the justice system and consequences for their actions,” said Mathis. “When you go to prison, you gain credibility when you come back on the streets. On the other hand, when you go to prison you can also be raped. So take your chances. We may see young people who make the wrong choice and go to prison and are assaulted repeatedly (in this game).”

Okay, so a little bit of (as far as I recall) consensual sex played out with a joystick wiggle was OMG SCANDALOUS, there was tons of tsk-tsking, class action suits, etc. But repeatedly raping the player is fine and dandy?

Why don't I enjoy playing Time Hollow when away from my computer/walkthrough?

In the particular segment I reached last night while visiting a friend, I cannot simply go to the place I need to go to, even though it's reasonably apparent that this place is important and even the in-character help (the psychic girl) tells me I need to go there.

Or rather, I can go there, but nothing happens, and I can poke at the screen endlessly wondering what I'm missing and why.

Instead, I have to go to several other locations and be told by another character that I'm in the wrong place. Only after being forcibly told that these places are wrong can I go to the right place and have it actually work.

Can't click on a door to try and open it, have to try and leave by another exit to then NOTICE that the other door is unlocked and open it.

It's a bit like Princess Maker or Cute Knight, except without the RPG parts and with more dating-sim elements. Control a character (human, elf, or demon), take jobs and classes to raise her stats, meet people and interact with them, etc.

Braid is available for PC. I'm sure someone cares.

Do I, personally, care? I can't say yes or no, I'm very tired today and a bit cranky. I'll look at it later. :)
No comments:

Someone's running a big story that mainstream games lately are TOO INNOVATIVE.

Is my irony meter broken?
No comments:

So apparently Wizards is pulling all PDF sales, citing piracy.

I have no doubt that selling legal PDF versions makes it easier for some people to pirate. I also have no doubt that people were pirating anyway, and that this won't actually stop them, but only means that anyone who wants a digital copy of the references (in many cases, far more useful than the hardcopy) cannot get it legally. Which is dumb.

Conspiracy theorists suggest that this is all part of a master plan to make their products available online via subscription to their site and their site alone (also, to only offer 4e in this way). I'm dubious, because that plan actually sounds logical. The Compendium they currently offer on their site is not quite that useful yet, but with some upgrades, it could be.

This is also a good time to promote GURPS.
No comments:

am I missing something here?

Four ecstasy pills have been found inside a computer game bought at a High Street store.

Richard Thornhill, 34, found the drugs under the front cover of X-Box game Grand Theft Auto IV, which he bought from Gamestation in Cheltenham.

Mr Thornhill said: "What made me feel the most distraught was the fact we let our 12-year-old play the game."

Now, I suppose what they may have meant here was that "This is a [toy/game/present/thing] we bought for our child, and it turned out to be unsafe because it wasn't checked properly by the store. Our child could have come across these pills." And that would make sense.

But the actual words used are slightly confusing, and give the impression that either the complaint is "They should be more careful when selling things FOR KIDS!" which is silly, since, well, GTA. Or that the complaint has something to do with playing the game itself, which it doesn't.

If playing GTA caused drugs to magically appear, would that make more or less popular?
No comments:

Review of the game on Gamespot

Like many things, might be vaguely interesting, but I don't really have the time.... Sounds pleasantly oldschool in some ways but I think I'll keep waiting for hte next Eschalon. For now.
No comments:

well, for parts 2+3 at least, this weekend on Good Old Games
No comments: