Notice anything unusual about this picture? 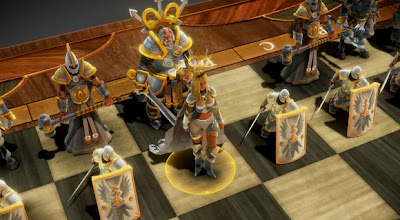 Men in heavy armor and shields. Woman in blatant underwear.

Have just cleared the sixth remix, which gets me far enough for a credits sequence but notes there's plenty left to unlock.

I admit, I like portable games that I can pick up and play for a few minutes and put away again. :)
No comments:

So, after the big press fa-la-la of the latest indie bundle, naturally a few people tried to jump on a bandwagon.

Including some very dodgy-sounding offers. Which many developers (including yours truly) looked askance at, because a hastily thrown together plan by an amateur trying to ape someone else's success just didn't sound likely to turn out that well.

However, apparently some people were more trusting/optimistic/willing to do anything that MIGHT lead to vast success. :) (Hey, we've all been there.)

It all went horribly wrong? What a surprise!

(Needless to say, I would not suggest trying to buy said 'bundle'. Just read the comments and try to follow the story of wild fraud and shenanigans!)
No comments:

starting commands and such - seen on gamesetwatch
No comments:

why do i do this to myself?

I walked into a game shop today.

And bought a copy of Dragon Age.

(Not because the game is horrible and evil, as far as I know. Just because... I have a pile of games I haven't played. And more games coming soon that I need to play. I had no need to spend money. Only some sort of COMPULSIVE ADDICTION can explain my buying this thing.)
No comments:

come and have a go

Demo downloads for Date Warp are now up.
1 comment:

... I hate the protagonist.

It's not like the author can't write male characters that don't make me want to smack them. Both Tonoya and Murakami are very cute in very different ways.

I suppose there's a line of thought that protagonists need to be morons so the reader can feel superior, maybe? He's an idiot, above and beyond his increasingly weird thoughts about women and relationships.

Complaining about girls being smarter than him WHILE being a complete idiot who hates schoolwork and makes less than no effort, complaining that a non-squealing girl is "a waste of a girl, should have been born a guy", when his friend sighs about how he's never had sex with a girl, his response is "Please don't commit rape, with your physique no one will have sympathy for you." The friend in question was not in the slightest suggesting he wanted to rape anyone, the friend is an ACTUAL nice guy (and rather big and muscular). Seriously, THAT'S your thought process? I'm sure it's meant to be a funny joke and it's just not coming across right, but... This guy got off on the wrong foot with me, I know, so I read everything he does now in the worst possible light. But ARGH!

(To be fair, he seems to recognise that stalking is wrong when it's aimed at him... and the girls just think it's funny. Dumb girls.)

Oh look, ANOTHER sex scene for him to spy on. (He does at least feel slightly guilty about it.)

And YET AGAIN, it's all about the woman SAYING NO REPEATEDLY.

Now again, it's really not in a rape way. She's saying no because she's afraid that someone's watching. (And someone is!) But still.

This game gives me the creeps.
No comments:

(since embed doesn't show up on feed, you can also click here)

As you can see, the video is done. The game release, therefore, is Soon.
1 comment:

Not mine. Some sort of match-3-RPG, but cuter than and (I would guess) easier than Puzzle Quest?

Not done yet either. But could be interesting.
1 comment:

So after some time to finalise recording and sync, we should have an OP.

So after some time to get that into the game engine and make sure the lead in and out of it works, we should have a game.
No comments:

It's tough, sometimes, being a liberal girl and enjoying "romance" games. As I previously mentioned about Kira Kira, I was bothered by the main character's weird reactions to women. And not entirely certain if the problem is translation or what.

I'm now paused in the middle of a scene that is even more disturbing.

The main character and some other students are spending the night at school in some unofficial capacity (there don't appear to be any chaperones). He hears a noise and peers into a window to see what's going on.

I'm now going to turn to EXACT QUOTES, although I'm leaving some words out in between, and the bolding is all my addition to draw your attention to what's bothering me here.

Hayashi-san[girl] is being pushed down by Yoshida-kun. She's on the floor and I can see her white knees moving a little.

Her seductive voice stops me.

Yoshida-kun, who's on top of her, covers her mouth with his own.

Then his hand runs through her clothes and exposes her breasts.

He closes her knees and takes her panties off with both hands.

Next he reaches to his own belt.

Wait, you're rushing too much. You only touched her a little.

Are you sure? Is there a chance of success? If she doesn't have much experience, then it's too dangerous to attack right now.

I'm cheering on Yoshida-kun[male] when...

... So, again. I don't know if this is an accidental nuance coming through via shaky translation. But the actions and the specific language used give the impression that the main character is actively cheering on rape. Or, at the very least, like he thinks that the correct way for a couple to have sex is for a girl to say no a lot and the guy to take off her clothes and penetrate her while she gives no sign of consent.

And the main character is not written like the author thinks he's a bad guy.

The above quote is the point I paused at to be boggled by the scene, so I'm not yet sure how it will develop from here...
5 comments:

Nice to see that they've made room for boys in the cute and sparkly world of Disney Fairies...
No comments:

fetch me a fetch 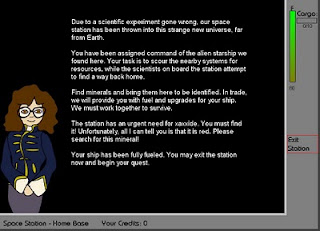 Simple random quest generation. After the first quest, it'll have to get harder...
No comments: 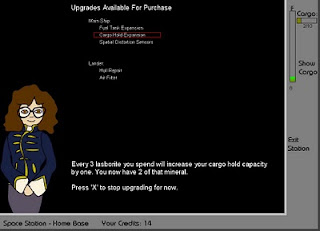 Nowhere near all of them are done yet, but the latest version does include mineral-fueled upgrades.
No comments:

No, I really don't have time to check it out at the moment. I will probably look at it next month when I am back in England.
No comments:

we don't hate girls! we just wish they'd go away.

Look, I have zero interest in playing "My Baby", not unless I can raise My Baby to be a fearless warrior that conquers space/kingdom/neighborhood, or send it out to fend for itself in a world of cruelly amusing puzzles and dangers, or something like that.

It is still the height of rudeness to claim that people who play games I don't personally like are not real gamers.

The games are meant to appeal to girls ages 6 to 11, allowing "gamers" to start with a newborn in My Baby Boy and My Baby Girl, then transitioning them to "experience the joys of parenthood through to the toddler years in My Baby First Steps"

I'm not talking much about this mostly because the games are all minigames. Many of them are frustrating at first, then the beat clicks in my brain, it's easy, and I move on to the next. I only play in small bits at a time, and I'm generally not stuck when I stop. So I have less to rant about.

The hardest one I've had so far was stomping moles out of my garden, because you have to keep the beat going, so a small fluctuation means you miss the next note or two as well...
No comments:

... the planet graphics got upgraded slightly. But surely you don't care about little things like that! More importantly, you can now make NOTES on the star systems and read them by mousing over the stars. Very helpful to keep track of where you've been and what you're doing... 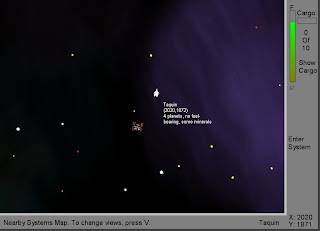 captain! i sense something! 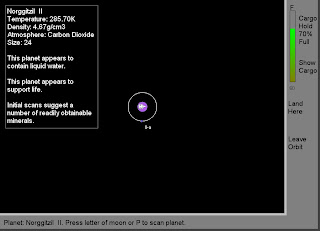 ... but there's no intelligent life down here.

Anyway, there are now aliens lurking on the surfaces of some planets.
No comments:

(Not in the game yet, although the new cargo stuff should be uploaded by now.)
No comments:

shovel some more coal in 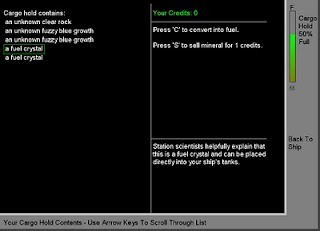 Working on a better cargo interface, which means it's now possible to fly out past your tank's limit by finding and using fuel on the go. A fairly daft thing to do as you're much more likely to get OUT there than to be able to get BACK, but it wouldn't be nethackly if you couldn't attempt silly strategies? 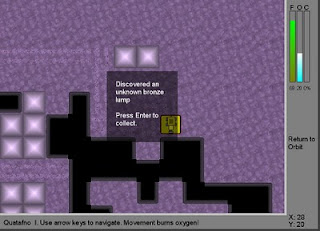 Fixing a bug in keyboard control and adding better tiling for "hole" terrain in planets... will probably do the same with water soon.
No comments: 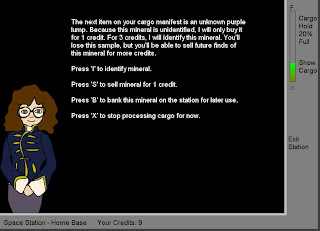 It's not pretty, but it's there. Which means there's enough present for an early prototype to be playable.

There is no point to the game yet, and none of the minerals actually do anything. But you can wander around, find minerals, bring them back, sell them, buy fuel, and fly iff somewhere else.
No comments:

By this point, you can travel to star systems, scan planets, land on them, hunt for minerals, and bring them back to your ship. 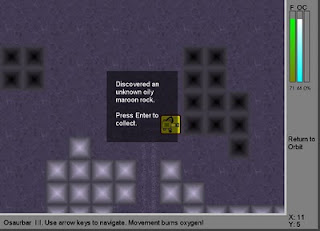 Then you run out of fuel and die. Next on list - space station to buy fuel at.
No comments:

So Rhythm Heaven came in the mail.

Before you are even allowed to START the game, you have to master some weird flick technique. Every time I do it, it either doesn't register at all (if I moved quickly), or it says I'm too slow. I cannot get past the START screen!

Being able to drive all over alien planets leaving permanent tire marks.
No comments:

don't I have better things to do? 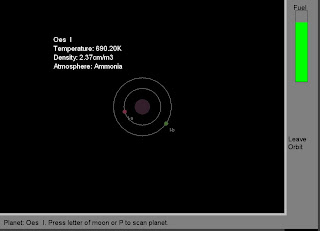 Planets and moons, now with vague planetary data attached to them, after a lot of arguing about how much realism I was willing to bother with. That ended with a decision to use wacky minerals rather than real ones, too... but I haven't gotten quite as far as placing them or being able to retrieve them yet.

I spent probably too much of the day making stars streak towards you (badly) while in flight. :)
No comments: 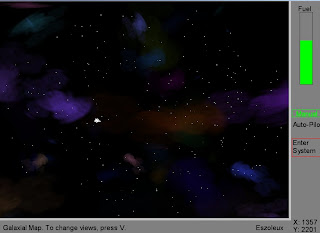 So far all that's here is some randomly generated stars and planets around them. They're not *logically* generated yet, just random.


Someone is leaning in over my shoulder complaining about my moons overtaking each other because of the randomness making the speed be wrong for their orbit. :)
No comments: