A Valley Without Wind

Not entirely sure what to make of this... it's... civilisation RPG platforming? It's a sidescrolling adventure game with crafting? It's about exploring the world and enhancing it? Whatever it is, it's new and different, so worth a look:

Currently in open beta at 50% off, plus a demo already available.
No comments:

Didn't love it nearly as much as some people do, I did a loooooooot of skipping even over text that was technically new. Yeah, I'm impatient. And I hate having to click constantly to advance over small amounts of text.

The protagonist got a lot less unbearable as it became clear that he was supposed to be very, very screwed-up. Although I look askance at some forum comments from people who liked him in the early game when it wasn't clear yet that he was anything other than a random pervert...
No comments:

Got totally stuck in what the walkthrough calls "week 3" - despite getting what should be the ending for that week, the game completely refused to continue to the next week's options. Had to start over from the beginning following a walkthrough slavishly with skip buttons to make any progress.

And some people think *Date Warp* is too hard / too much replay? Hrmph. :)
1 comment:

The problem with a lot of H-games is that the protagonist is such a jerk that I really don't want him to get together with any of the girls.

I expect this guy has his reasons, but as it is, I'm inclined to dodge sex as much as the game will let me... Can't I just get Kiri and Miki together instead? (Note - I'm obviously fairly early in the game still, spoilers not wanted.)
No comments:

Good old Games is doing a D&D sale at the moment, which means mostly a lot of games I've already played, but I never did own the Icewind Dales.

Not sure I'm desperate to do so right now either.

Interestingly, though, this sale takes account of games you've ALREADY bought when calculating your discount.

Also, I'm feeling a vague restlessness which is tempting me towards purchasing DLC for DA2, and an icewind dale game might be a better idea than that...
No comments:

So, you know that Sony and the PSN have had a lot of problems in the past year.

Fewer players means fewer problems! So now you have to sign away your rights or you can't use the PSN anymore. That'll shut you up.
No comments:

this will get boring to read fast

creating a decorative non-centered NVL mode
smoothly dissolving in and out of it while dealing with windows that, when not in NVL, are meant to stay visible during transitions
completely rewriting all the buttons and putting them into overlay layers so that they will stay up during transitions (Two different button menus, depending on whether we're NVL or ADV at the time. This game has long narrative passages.)
squeeing over artist sketches
... not writing an awful lot of script

Trying to find answers in the documentation is rather like divination so far, but at least it's quick to reload.

(also, feebly trying to design a banner so we have something to hang on our pipe structure come yaoicon)
1 comment:

I figured it was about time I bothered to actually read the RenPy code myself instead of dumping everything on Spiky all the time, especially since I'm trying to do a small project which will be a pure VN and thus not require someone who can hack the internals to do ridiculous minigames :)

So far, I have managed to build my complicated dialog display structure which looks sufficiently different, put together images with long lists of composites, scales, and cropping in order to generate both sprite and side-image, gotten the blasted window to stay up during dissolves, and run into a problem that is probably an unnoticed bug in the version of RenPy I'm using. (Yes, classic newbie arrogance to think you've found a bug, but nobody who's looked at it can see any reason it shouldn't work, and others have verified code that "works" isn't working, so it looks to me like the on-hover text is broken and it's just that nobody uses it so nobody cared.)

All that for this: 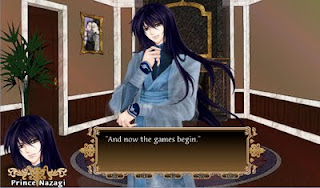 (Note - this is not actual in-game dialog, this is me testing stuff.)
No comments:

So, I dreamed I had a job at an office while working on games, and I had apparently signed away merchandising rights for cash, and this Mysterious Old Man was delivering product samples to me, so I was displaying them on my cubicletop.

One of the boxes was labeled "Petime" - which confused me because even in my sleep I was pretty sure that wasn't MY character.

It turns out it was some sort of bizarre hybrid of Petime from Lucky Rabbit Reflex and (so far unseen to players) Barbara from Magical Diary. Her hair was in multiple colors (including blonde, brown, and purple) and her face was painted black to represent her ninja nature. She came with tiny little weapons and a maniacal grin.

Of course given the art design of Magical Diary I would *love* to have mix-and-match Pinky Street figures for it, but, um, not gonna happen in the waking world. :)
No comments: 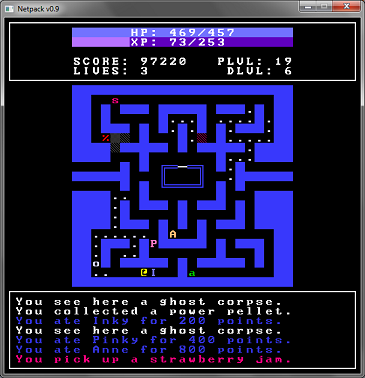 An idea I just have to find amusing, even though I haven't actually taken the time to play it yet.
No comments:

So apparently someone is now selling modern CYOA romance novels, featuring Vampires and Fairies and Science Fiction and so on.

They can be found on Kindle at Amazon, and also on iTunes.

I have personally zero experience with the author in either these or her "normal" romance novels, but there's a review here.
No comments:

A gameplay trailer from a surrealist art game.

Looks like someone's making a 3d steampunk platformer... that's 3d in the sense of red-and-blue glasses!
No comments: