Dumping in the other art I had made for Science Girls

Doughnut!!! by xunini on deviantART 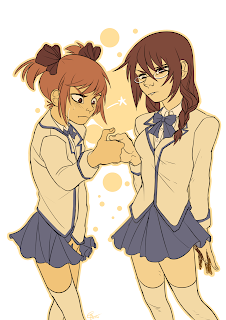 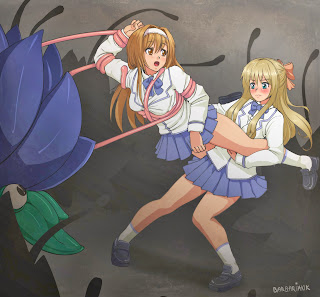 The Trouble With Slirrups
Also, if you somehow haven't heard, Magical Diary and Planet Stronghold are on the Humble Bundle this week, supporting RenPy. So if you haven't played, or you want to donate more to VN development... go have a look!
No comments:

Interesting look to it, although it doesn't feel very RPG most of the time. I have some dubiousness towards ubisoft but worth seeking more information at least.
No comments:


Science Girls by Pocolla on deviantART (Above - bonus art, not an in-game image. There's more coming!) It's that time again! What time is it? Time to announce a game being available on Steam - Science Girls!
The Steam release of the game has a bunch of little polish upgrades applied to it. New music, new animations, new map tiles, and so on (and yes, achievements). No new plot if you've played it before but a lot of tweaks to make the overall experience more enjoyable.

(Also, I notice that steam users have tagged the game 'Visual Novel'. Well, okay, if you say so. I generally don't think it counts because the talking part takes a clear backseat to the hitting monsters part, but... There is dialog, and it's in a VN-ish format, and there are some choices you can make and they have a small impact on the game, and it's RenPy, so... Close enough?)
1 comment:

And I thought to myself: Self, there is not nearly enough art of Elodie as Tuxedo Mask out there. You should do something about that.

Comm Elodie as Tuxedo mask by Lily-Fu on deviantART
No comments:

"Don't read the comments" - well yeah, I broke that rule, but bear with me, I'm going somewhere with this.

So I was looking at the Steam discussion forum for a recently released game and found someone loudly proclaiming that he'd played many RPGs and this was THE WORST rpg he'd ever seen. Given that the game appeared to be a complete and playable title, I find the idea of assigning the 'worst' tag to it pretty laughable. I mean, there's impressively bad things out there. Try harder!

But then... what *is* the worst RPG? Either in general or for me personally?

The problem is that many RPGs which would fall into my 'worst ever' pile are going to be things that I disliked strongly enough to give up on after less than five minutes of playing. Sometimes that's just because they were super-super-oldschool games whose control schemes I could not figure out! (Lack of clear manual) Terrible experience for me that I hated, but known to be great games by people who managed to get into them.

So which would you rate as 'worse' - a game that I couldn't figure out how to get started and immediately abandoned, or one where I enjoyed the first hour or so but things went progressively downhill until I eventually gave up in despair? I obviously got more enjoyment out of Lionheart than I did out of Deep Labyrinth, but I don't feel like I can give any meaningful commentary about Deep Labyrinth because I didn't play it. I looked at it, said "No", and moved on.

I could point to some renowned kusoge and claim them as the worst RPGs ever, maybe even read some reviews to have a bit of context for that judgment, but even then the ones that we hear about enough for them to become legendary bad games are often filled with interesting-but-failed ideas that made them worth talking about.

If a game has okay elements but the gameplay is so poorly placed that it will bore you to tears, is that still not bad enough because there were some things in it that might have been usable in a better game?

Since games which ARE unplayable do exist, should the title of 'worst' should be reserved for them? Or are they at that point no longer games?

Naturally, a google search for "worst RPG ever" turned up 'Oblivion' in the top results. Yeah. Those multimillion-copy-sellin games are just the worst, aren't they?
1 comment: