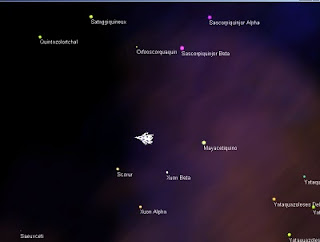 This is not a serious project... for me at least... but discussion of SPACE made me feel the urge to fool around with rapid prototypes?
No comments: 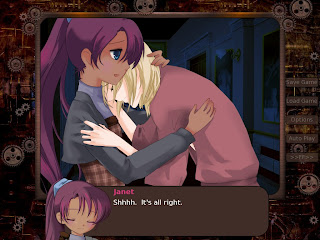 So, Date Warp is nearing completion (haven't I been saying that for a while?)

But seriously, at the moment all that's left is:

1 last CG
Final version of the theme song
Mixing the opening video (the animation is done, it just needs the song to be synced to)
Prettifying the auto-advance display

And then it should be ready for release. I expect it next month sometime.
No comments:

Still trying to get the non-windows release of Cute Knight Kingdom up to speed. If you have some time and are willing to comment, please go here for more information and downloads.
No comments:

taking a gift horse for a walk

Another Amazon gift certificate fell in my lap.

... So I bought an album I'd heard of off Pandora, and a copy of Rhythm Heaven.

Well, it's supposed to be good, I've certainly enjoyed my other music-based DS games a lot, and as something DIFFERENT from the others it might serve as a more casual brain rest?
No comments:

as I was saying

Eschalon Book 2 is due out soon :)
No comments:

I have finally gotten around to downloading and checking out the demo.

It is more up-front playable to a confused newbie than Depths of Peril was, IMO. It feels more Diablo-like, it's roughly clear what you might want to be doing. There is, obviously, a LOT more to it than Diablo, but you can hit the ground running and not feel too lost.

Things do quickly start to pile up against you, though. Quest monsters stubbornly refuse to be where your instructions tell you they are. Quests mysteriously fail themselves for no obvious reason - possibly because of taking too long, but really, there's only so fast you can run! And monsters keep respawning like mad, which makes it tough to feel what you're accomplishing. A perfectionist will really hate this game. There's so many choices, skills and loot out the wazoo, and events happening all over the place... you can't possibly keep track of it all.

And yet, it's not as baffling as DoP, which could make you feel too paralysed by doubt to do anything. Here, you may be running like mad trying to put out fires, but you have some clue of how to put out fires, if you can find them.

Speaking of fires, that dastardly scoundrel in the caves has unleashed a WEATHER CONTROL MACHINE! No wonder lightning keeps striking the town...

Am I going to buy it? Um... Not right now, because a) It's over $20, and passing that sweet spot always makes me take a harder look at a game, even a game I really like. b) I own no less than 4 DS RPGs that I haven't played for even 5 minutes yet. That's not even counting the one I got several hours into and then loaned out. c) Eschalon should have a sequel out sometime this year.
No comments:

no one is the slightest bit surprised

Ubisoft's shitpile of Super DRM is properly cracked at last. Sure, it took a while. But it got done.

For some execs, all they care about is that it took a while and those few months mattered. Yeah, well, if that's all you care about, you also don't care that I'm never buying your crap.

Man, I get cranky on this subject, don't I?
No comments:

Today I've been going through the CKK endings list and adding some less-successful versions of the good endings, since in the original there aren't very many endings you can get with a low Dream score. These aren't the new endings that people are likely to be interested in, but they may provide a few more outcomes along the way... although people who've been playing for a while aren't too likely to screw up enough to land in the Dead End Office Job, are they? :)
No comments:

I have found a japanese stock music site that licenses vocal tracks.

I think. (Auto translation is confusing!)

... Of course, I *have* a musician lined up for my current project, but I admit it's tempting to throw in some actual jpop for something in the future. Maybe. Of course, it's not necessarily worth it since fans obsessive enough about Japan to insist on authentic music will not play my games to begin with.
1 comment:

Dedicated blog readers should be aware that I do not own a DSi, because I am a regular international traveler and throw shitfits over region-locking.

Therefore, it was never within the realm of possibility for me to buy this game.

Of course, from one cursory review, it appears to be doing about as well as other "western-style" dating games... that is, it kinda sucks.
No comments:

Ubisoft still shit, no one should buy from them ever.

I'm not sure which is more depressing; that they're evil enough to do this or that some of you out there are stupid enough to pay them to stab you with screwdrivers and not be allowed to play any games.

Seriously, what are you thinking? You can't honestly believe that their systems will allow you to play whenever you want, just because you did a little thing like pay them $60. IT'S RIGHT THERE. YOU CAN SEE IT DOESN'T WORK.
No comments:

A collection of RPG minigames... sort of?
No comments:

assume makes an ass out of someone else

So I went by Blockbuster (US) to attempt to rent some games.

I had money. They had games. What didn't I have? A bloody driver's license.

Therefore, they don't get my money and I don't get a game. I fail to see how anyone wins in this situation.

(If you know me, you know why I can't possibly get a driver's license or state ID. You might then argue that this means they shouldn't be renting games to me either. I will point out that since they also require my credit card, they would have been perfectly capable of charging me the replacement cost had I taken the games and left the country. I can't rent from Gamefly because my address won't fit in their forms, but that wasn't unexpected.)
1 comment:

Didn't read the fine print? The store you bought from now has possession of your immortal soul.

(Although my more UK-law-savvy partner insists that such a contract would never be valid anyway, and rather than demonstrating that people should read T&Cs more closely, it just demonstrates that T&Cs are a crock and should be considered invalid in general.)
No comments:

Apparently a MMORPG did something incredibly stupid, and then when it was pointed out just how stupid this was, backed down and apologised.
No comments:

So I got the game and have played small bits of it. I'm not really into it yet, and VNs generally pick up a lot as they go on. So far, the main character annoys me.

scene I'm in at the moment (where I paused and saved, so I haven't finished it)

We're in a restaurant. Some drunk guys are hitting on some girls, in awkward/rude drunken ways. Protagonist wonders if the girls are annoyed but hiding it, or if they actually like this treatment, since they don't appear to be protesting.

Girls notice the members of a band they like in the restaurant, so they ditch the initial guys and go drape themselves over the band members.

Abandoned guys get annoyed that they've been abandoned, stand up, and start drunkenly challenging the band members.

Protagonist comments that he is totally on the side of the abandoned guys, because women are just so cold and cruel and emotionless and fickle. The guys were "trying really hard" to pick them up, so they "deserved" better than to be abandoned like that.

Then the protagonist notices that one of the abandoned guys has a nose piercing and instantly loses all sympathy for him.

This may somewhat be translation problems, as the text is a little rough in a lot of places and the punctuation is missing half the time. If it was meant to be clear that the girls were with the original guys, or at least that they were flirting with the original guys, it might make a fraction of sense... and protagonists being kinda dumb and making stupid judgments is typical in these games. But unless I completely misread/misremembered it, the juxtaposition of "I suspect those women dislike being hit on like that" with "How dare they abandon the drunk guys hitting on them!" seemed really odd.
1 comment:

what else am I doing?

Spending far too much time on a gorgeous GUI mockup of a game that doesn't have as much as 'hello world' actually playable yet. Which means I probably shouldn't display pictures of it either, especially as the game may not look 100% like that depending on how hard it is to implement all this...

GUI design really isn't my strong point although I do keep improving, which is why I want to dance and crow for attention when I think I've made something that looks decent.
No comments:

You may have noticed me not saying much about casual games lately. This is partly because I'm busy, and partly because I dropped my BigFishGames membership owing to changes in their affiliate practices - basically I was buying stuff from them because I was making much more than that selling their games every month. They cut that program, so I stopped paying them.

It's still true that I'm busy, though. I own at least two VNs and two DS RPGs that I haven't even touched yet. Possibly more. I forget.
No comments:

yanking out the rug

So, over on the Reflexive forums you can see a bunch of customers in a panic that all their purchased games can (possibly) no longer be installed/activated after June, despite company promises in the past that of COURSE they would remove/support the DRM if they went out of business.... (I do not personally know if they will or will not be able to get their games working. I only report that there is some panic.)

And elsewhere we can find discussions about how on Steam, you can buy a game that completely doesn't work and be unable to get your money back without risking losing everything you've ever bought...
No comments:

... not an April Fool, honest! Apparently the school year in Japan starts in April? I dunno, but for whatever reason, MangaGamer is putting their school-themed games on sale for the first week of April.

It's supposed to be pretty good and have an acceptable translation, although most people I know have played the H version, not the all-ages version. The all-ages is cheaper, though, ESPECIALLY now. I don't usually buy from MG because their DRM makes me nervous, but knocking the price down far enough makes me willing to take a chance. Once. We'll see what happens.
1 comment:

It probably comes as a surprise to very few that bubble ("Casual gaming now worth billions!") plus economic turmoil ("Credit crunch!") plus insane pricewars ("Now only $2.99!") has led to a bunch of companies imploding.

Playfirst gave up running their own portal recently - and comments about the price collapse problem here - and today Reflexive announced they're pulling out as well.

BigFishGames is holding on to the lead, but struggling to try and pull the prices back up with the "collector's edition" games.