(If that doesn't embed properly for you, you can also click through here to see it.)

Several little things going on at the moment...

The Valentine's Weekly Bundle is still going on over at Humble, which covers a variety of visual novels as well as the option to upgrade for a love pillow... from Hatoful Boyfriend. The lovely Deji created some fun art for the upcoming Black Closet: 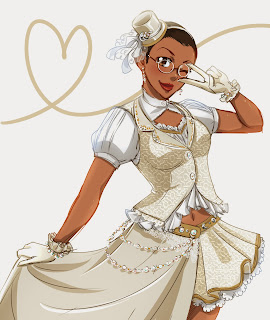 The game is still in beta, but is very nearly complete. I'm really busy right now but I expect we can officially launch it sometime next month.

And, as mentioned, Sword Daughter is now on Steam (and some people are paying very odd prices for the emoticons, but who knows if that will last?)
No comments:

The game includes all your typical steam-powered bells and whistles, like trading cards, collectible backgrounds, and achievements. (If you already own the game, you will need to play through it again to unlock most of the achievements, but this should be easy enough to do with the section map.)

Speaking of which, if you bought the game direct from my website and want a Steam key, please email me with your order information and I'll happily hand one over. Please do ask by email rather than by forums, it makes it so much easier to keep my key list organised.
No comments:

Sunless Sea - why I find it frustrating

Disclaimer - I have only put a few hours into this game and am not good at it. I may be missing things that would make the experience suck less. Also, this is a PLAYER opinion and NOT a business opinion, this blog is for whining about games after all.

This is a game all about atmosphere. There's a cool, weird, unique setting, and a mildly randomised map to sail around and uncover. There are stories and fragments of stories scattered everywhere, dripping with implication and promise. That's the good part.

The vast bulk of your time in the game is spent staring at the screen as your ship slowly inches along through the murk and gloom, sailing between islands. Again, this is an atmosphere thing, they want the game to be slow. It does mean that you're wasting an awful lot of time doing not very much and can put hours into the game without accomplishing anything, and that has negative consequences elsewhere. Chalk this up as a medium part. It's not good or bad but it's a thing.

Your sailing comes at a high cost. Many people hate hunger timers in games. This game has MULTIPLE constantly-dwindling resources. You have hunger. You have fuel. And you have sanity. Sailing around means you're losing all three of these. You can, of course, buy more... with your extremely limited money supply... which you may or may not be able to earn any more of in your next sailing trip. Sorry, sucks to be you!

Even reviews that LIKE the game grudgingly point out that you can get horribly stuck in the game due to a lack of resources and a lack of any reliable way to earn them.

There is a sort of black belt around to the sea’s loose centre, within which relatively few ports of import can be found. That this means scant opportunity to resupply is one thing (and, really, you should only be buying supplies from places where they are known to be cheap anyway), but that there is nowhere to check in and grab a port report which you can submit back in Fallen London for reasonable rewards is a greater one. I have hit the wall in Sunless Sea a few times because I simply cannot earn money to fund a trip further out, let alone buy upgrades.

Very slow attrition, hitting the same few ports over and over will gradually bring in enough money and chance rewards to buy enough fuel to reach further flung territories, but at times I have found this too onerous. With a starting ship, the speed of travel can be so slow, the waiting maddening. An accurate representation of the life Sunless Sea means to evoke, but it does mean some players may bounce right off it a couple of hours in.


This is why I've pretty much given up on the game. I've had one or two really interesting sailing trips where I was getting to exciting new places and finding hints of stories... and then I've slammed into not being able to fuel up enough to go anywhere I haven't been before.

And then there's the combat.

Combat has been completely revamped from the earliest versions, so I won't talk too much about the old combat. It was kinda turn-based and, while playable, was not too exciting. Many people complained that it was even slower than the sailing, because you had to sit there staring at your timers and waiting for them to tick down, while doing nothing else.

A constant problem with, say, JRPGs, is that once you level up enough that the basic slime is not a threat, you are far more annoyed by the amount of time it takes to step on the random encounter square, sit through the transition, and then be required to set attacks for all your characters, before it will finally let you JUST SQUISH THE SLIME WHICH YOU CAN DO IN A FRACTION OF A SINGLE HIT AAAAAAARGH.

Basically, if your time isn't being spent making interesting decisions, you really resent your time being sucked away. So in that early combat mode, you queued up some actions and mostly sat and stared, waiting to intervene if anything went wrong. There wasn't any cool animation or anything FUN about the fight to watch, so yeah, it could get dull.

In the new version, combat takes place on the same sailing-around map as normal navigation does. This does add more possibility for doing things during the fight other than just waiting for your gun timer to tick down - you MIGHT be able to dodge certain kinds of trouble, or even make things worse by sailing your ship into a rock while you were paying attention to your guns, or sail into the range of more enemies, oops.

In some ways this works. Battling with pirate ships feels cool and nautical, both of you slowly wheeling around... Upgrading your ship has obvious benefits to everything, if you can ever afford it. And I assume that if you get good enough guns and stats you can eventually kill things pretty fast and not have the huge time sink. (Though I wouldn't know, since I've never been able to upgrade.)

What drives me nuts is the monsters. There aren't that many of them, at least, in the areas I've been to, and you can PROBABLY avoid most of them if you're careful. But once you have their attention, they can be tough to shake. You can use full engine power to try and speed up and dodge them (although the help doesn't mention this until several hours in) but that may make your ship randomly explode (so much for people claiming that the luck of the dice aren't critical here!). They can follow you a port and camp practically on your bow waiting for you to press 'launch' and take instant damage, which feels stupid to me and breaks immersion (I feel like getting a monster to follow you to port should trigger some sort of port event. Maybe they blame you for bringing trouble! Maybe they rush out and slaughter the crab that followed you home! Maybe they thank you for luring it in!) but even without story effects, RPGs generaly station guards around citypoints like this to avoid the stupidity of 'i will be immediately hit if I step outside and there's NOTHING I can do about it'

But the worst part is if you do engage with the monsters. There's no animation scripted for fighting them. So unlike pirate vessels, which will wheel around and fire guns at you like you're doing, monsters will just sort of drift nearby, then occasionally move in your direction and bounce off your hull with a little clink noise. It's stupid. It's not cool. It's not fun.

Look, this game put its effort into the writing, not the graphics. Fine! You don't want to animate a battle between a ship and a giant glowing crab, fine! But don't expect me to be having fun with 'clink'.

If closing with a monster shifted into an encounter, with words to read and choices to make, it might be more interesting. You could avoid the encounter by having good enough guns to shoot the monster before it gets that close. And if rabid zee-bats swarmed your vessel you could get descriptions of them swooping through and taking bites out of your rigging with the resulting damage, instead of 'clink'.

Other grumbles - the game really wants you to treat it as a roguelike and pressures you into accepting permadeath and starting over. But with a game that is this slow and this lacking in early-game differentiation, the prospect of starting over is massively annoying in a way that it isn't in something like Spelunky or Necrodancer, where I've sunk countless hours into delightful failure.

Also, from the RPS comments:

I did just make a catastrophic error caused, in part, by the chain-of-captains (though one could claim it’s inherent in any rogue-like game). I was trying to scrounge up enough cash to do something and sold what I thought was my old engine, having bought a new one. Oops. That new one I bought was with my _previous_ captain, just before he got killed. So I sold the only working engine for my boat and did not have the funds to buy a new one. Crap. I don’t think there’s an easy way to commit suicide in London, so I just started a new chain of captains.


Does that sound like fun to you?
No comments:

Just for fun, an image of Elsa, the protagonist of Black Closet.

It's exhausting to look back and see just how long we've been working on this game... well, honestly, even I don't know when it started. Sometime in 2012. Homestretch at last!

Oh, right - the game is now in beta testing. And by 'beta' we mean 'It's mostly done and all the art is in now'. To check out the beta version and buy the game at a discount, visit the Hanako Games forums.