... the new GL stuff in RenPy causes all kinds of funhorrible bugs, and development lately has been mostly tied up in effects that work in software but not in GL, and work in GL but not in software, and work on decent computers but are horrifically broken on the outdated Win2K box I use for baseline tests...

So while I have written some plot in recent weeks (I'm embroiled in Student Council Election subplots) things haven't moved forward as much as they otherwise might. 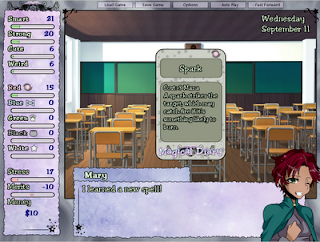 But at least some individual spells are now learnable.
1 comment:

is now available on GoG. So I guess we have to slightly forgive them for being jerks. Or at least, chastise them while GETTING THE GAME OH COME ON JUST GET THE GAME YOU KNOW YOU WANT IT.

(I have a retail copy, but I may be badgering someone else I know into this.)
2 comments:

This is just a video, but it reminds me a lot of certain little adventure games...
No comments:

So, Good Old Games has a 'we're closed' sign hanging on the front door.

i've not actually PLAYED the games I bought from them, mind, but I still liked having them there...

And I'm baffled, too, because I got the latest promo emails from them this week. So... huh?

Even more odd - there was literally ONE DAY between them eagerly exhorting people to buy their newest game and a vague farewell message.

# Thanks for the support everyone. Hopefully everything works out for the best! 9:38 AM Sep 17th via web

# Sometimes it's really hard being DRM-free... hard to keep things the way they are and keep management and publishers happy :( 9:25 AM Sep 17th via web

There are rumors that this is some kind of crazy marketing stunt to intentionally get people upset so that they can ride a press buzz onto a relaunch.... but it's just rumor.

As expected, it really was just a PR stunt. I am not linking their stupid video because I'm too annoyed to watch even a silly video with monks in it.
2 comments:

From discussion of the upcoming title, The Last Guardian:

Early in development, the main character in The Last Guardian was female, but the team ended up going with a boy. The reason: they thought it would be more realistic that he would have enough grip strength to be able to climb around, and because they wouldn't have to worry about camera angles with a girl who wears a skirt.

"Oh gee, if we had a giiiiiirl character, we'd have to put a tiny skimpy outfit on her and then people would look at her inappropriately so we'd better not have girls at all!" Hey, how about DRESSING THE CHARACTER APPROPRIATELY? Amazingly enough, women are capable of WEARING PANTS. It's only batshit insane game art designers who think that this is reasonable clothing for a female character.

And as for 'realism', a) The only person I personally know who rock-climbs as a hobby is female, b) Kids climb onto things they're not supposed to regardless of gender. Even I climbed onto roofs and I'm the poster child of anti-athleticism c) There's a fucking griffin in this game. WHAT realism?

Some days I want to stab people in the eyes.

Y'know, I don't care if someone makes a game with a male protagonist. But going out of their way to throw in a "girls aren't good enough" like this? FUCK YOU.
2 comments:

I haven't been talking much because I want to get properly exciting screenshots ready to display. I've been doing a lot of dialog (and a lot of comedy) lately, but naturally a single line from a funny event tends to make no sense out of context.

We're trying to quickly bang together a demo of the character generation tool for Hyper-Con, a little-bitty con this weekend in SF. People will probably be more interested in playing actual games than using the dollmaker for a game that's not done yet though :)

Should soon be implementing spell acquisition, so a screenshot of that might turn up shortly.

At five weeks into the school year's worth of plot, we're at about 30,000 words.
No comments:

fourth word on the third line of page 12

According to this joystiq preview, the upcoming gorgeous Studio Ghibli RPG on the DS is falling back on an old method of copy protection - clues in the feelies! In this case, the big magic spellbook that comes with the game. It is, at least, large and fancy enough that you're not too likely to lose it.

However, needing to cart a big book around might affect the portability of the game a bit? While I usually don't, I can jam my DS into my purse, even though it's one of the old big silver ones. I couldn't fit it and that book. (Most of the time, though, if I'm carrying my DS, it's in my backpack, and then I'd have room for a book.)

As the preview points out, this copy protection will also mean this is not a good game to import if you're not fluent enough to understand the prompts for spellbook research. But surely there will be English eventually...
No comments:

(some) Starcraft 2 Players are Assholes

... that's probably not news to most people.

But this story of the frustration apparently faced by anyone daring to post on the forum that she's female and would like to find some other women to play with is still very siiiiigh.
No comments:

The DS horror adventure game I've been talking about isn't quite released yet (due in November I think), but the free flash webdemo has also been translated into English, and is playable at the aksys website.

At least in the demo version, it appears to suffer from one of my pet VN peeves... super-short sentences requiring constant clicking! (But I say this after, like, ten seconds of playing, so.)
No comments:

For EVE Online. The winner gets their ship into the game (and some other stuff besides)
No comments:

Email ThisBlogThis!Share to TwitterShare to FacebookShare to Pinterest
Labels: MMORPG

While I shamefully haven't thought of it in a long time, freerice is still around and apparently now hooking into facebook.
No comments:

I ponder whether I should make adjustments to the title "Magical Diary" to make it more obvious to the clueless outside what the point of this is. On the one hand, that sounds patronising to those already in the know. On the other, getting the attention of people who weren't already following the game enough to know about it is useful. I would like to be able to get the point into people's minds quickly that "there's this dating sim where you get to be a wizard and cast spells and romance your classmates".


clear but a bit blunt. also you're not only dating wizards, there are witches too!

Magical Diary
~ Love Lives of the Young And Wizardly ~

kinda longwinded that, although some japanese games DO have pretty long sub-titles. also, while I'd like to get the romance aspect across, there IS more to the game than just that.

My French is a bit rusty but that should get the right effect across in both French and English. However, while it lets anyone looking at a page for the game get the idea that there is Spells and Romance here, most casual browsers probably wouldn't be able to remember and repeat it, so it wouldn't quickly spread the idea of "Hey there's a dating sim where you can be a wizard!" which is what I'm aiming for.

Also, French isn't entirely thematically appropriate. Vermont may not be all that far from Quebec but the setting is not french-flavored.

Maybe I should stick with the Young and the Wizardly. It does sound a bit soap opera...
1 comment:

Today's game - sitting and playing with the reactive dots of the current google logo. wheeee!
1 comment:

Interesting article on a randomly-generated platformer thing.
No comments:

No, this is not the one I'm working on, but it is something that Cute Knight fans should find interesting!

You're a young student (either male or female) just starting out at a fancy magical school. That much is certain. EVERYTHING ELSE is up in the air. Are you from a poor family or a rich one? Born under a lucky star? Been clumsy all your life? Have a cat for a familiar? Make friends easily? Tend to accidentally get into trouble all the time?

You can set ALL these details for your background before you've even started your first day at school. Then once school starts, you'll have multiple events to schedule for every single day, eighty other students to interact with, and literally HUNDREDS of random events that you might encounter and which might go well or badly.

Skip class? You might find your way to a magical artifact hidden in a cave on the school grounds, or you might just annoy the teachers and end up in detention for the rest of your life. It is astoundingly complicated and no two playthroughs will be alike. (There's a wiki being built by players to share the secrets they've encoutnered so far!)

If you enjoy building different characters in Cute Knight this should keep you busy for a loooong time. :) You can order the game here (Windows Only).

(This is not a 'traditional' visual novel - no anime characters, no standup talking sprites. It is mostly text, but there are some pictures. If you do not like reading this is not a game for you.)
1 comment:

There's apparently some kind of Professor Layton promo event in SF next week. I wish it didn't involve a random Gender War though....
No comments: