The only thing that jumps out at me in the current promotion is the Journeyman Project which I've heard good things about but never looked into. However, backlog. Enh.
No comments:

Space Hulk Explorer Roguelike: You play a salvager who finds randomly-generated huge spaceships floating around, and you go through them looking for loot. Different skills for different classes (including different abilities to identify the weird stuff you turn up) and your score in the end is based on the value of what you bring back to your shuttle and how long you were gone. If you live.

All-Girl Dungeon Crawl: A yuri game not needing to waste much time with things like plot and explanation! You're an all-girl gang of dungeon divers, you go kill things and take their stuff,when you set up camp to rest you go into dialog mode and then you can argue over loot-splitting and romance people.
No comments:

pride and prejudice and whips and chains 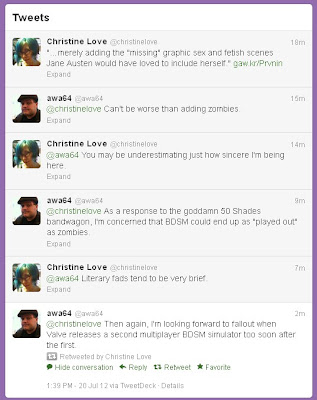 I'm especially amused because I was just in the middle of trying to start a conversation about adaptations of public domain works for romantic purposes, and after posting that I then ran into Christine's tweets about this other thing. :)
No comments:

Been playing this a little bit on PC (cursing the thoroughly obnoxious Games For Windows requirement every time; having to launch steam was bad enough, having to log into both is REALLY ANNOYING) and have gotten far enough to splash into some underwater sections.

Which may have been a bad idea on the dev's part, as it suddenly makes the comparison to Aquaria inevitable in my mind. They are, after all, both fun cool stylish 'metroidvania' things where you are flying/swimming around instead of walking and jumping. On the other hand, neat as this thing looks, drawing the comparison makes it jump out to me that Aquaria was better in most respects.

If the title screen is accurate about how much of the game I've covered, this thing can't be very long. And while it's cool to fly around in, it's sort of lacking in even a pretense of a plot. I mean sure there was a tiny bit of setup at the beginning but it pretty much vanished immediately, along with all my fellow ships.

It also seems a good bit easier than Aquaria, at least when you're not doing something insanely stupid by trying to use the wrong tool for a section. This isn't really a bad thing, as you may recall me sulking that Aquaria's difficulty seemed at odds with its potential joy of exploration, but... in a way it's the inverse. Aquaria was a pretty place where I wanted to spend more time just chillin'. This place LOOKS so dark and scary that it's surprising to me that it hasn't, so far, presented much of a challenge.
1 comment:

Almost anyone reading this who cares probably already knows, but the Carpe Fulgur pack is on 75% off deal today on Steam.
1 comment:

So after a long delay I tried to pick up Spirit Tracks again while waiting for something to download. I had time to kill. I could put up with some really pointless filler. Right?

... that was before the next quest it threw at me is something that if you take even a single point of damage you have to start over from the beginning and each attempt takes about half an hour. Half an hour of staring mindlessly at the screen waiting to reach your destination, with one or two attacks to dodge sprinkled somewhere in there.

Back into the SHIT GAME pile you go, then.
No comments:

I've put myself in something of a bind here - I'm actually posting quite a lot about games but I can't post it *here*. Because I'm doing a Let's Play of a game in a situation where I think it would be inappropriate to do it under an account that is blatantly _MY_ account. Not because I'm ashamed of my words, but because I'm obviously in this business.

I may be the only person in the world who cares about stupid things like that. :)

(If you saw me talking about LP on twitter, this is a different game. The one I ordered in the mail is something I could indeed Let's Play under my own name because it's in a completely different genre and twenty years out of date.)

It's hardly direct competition anyway... my customers aren't interested in this game (I know, I've already tried to sell it to them!). But if you're curious what I'm up to, look around in brokenforum's LP section for someone doing a game that is both an RPG and a visual novel. Like I said, I'm not ashamed of my words, I'm just trying to diffuse potential conflict of commercial interest. (Er, did I mean defuse? Oh well, I suppose either works.)
2 comments:

While I"m making Higgs boson jokes, someone else made a little game on the subject called Ms Particle Man

... How come on this computer every time I add a link it tries to insert a "blank.gif"?
No comments:

Doing a limited-time deep discount on a bundle of Date Warp and Science Girls, FOR SCIENCE! Won't last more than a couple of days, so check it out now.
No comments:

Apparently there's an interesting 3DS title called 'Rhythm Thief And The Emperor's Treasure' due out soon, but due to Nintendo's shenanigans, I still can't buy a 3DS.

A story where the Crazy Antagonist appears to have an unbelievably impossible ability to predict everything that the party is going to do and keep screwing you up, because it turns out in the end that the *antagonist* was caught in a GroundhogDayLoop. All this madness you're going through for the first time, they've been able to perfect in order to guide you to the true goal!
1 comment:

why do i keep playing this game?

I *hate* this game. All its mechanics were designed to annoy me. It makes me want to punch it repeatedly. WHY AM I STILL PLAYING obviously i hate myself :(