There's an article on the BBC about a guy who's 'invented' a camera that, instead of printing a picture, prints a little description of whatever you just took a picture of.

Of course, we don't actually have that technology yet - it's really sending the photo to amazon's Mechanical Turk, where a human is describing the picture and sending that information back. (A spot-on perfect use for mechanical turk really!)

What interested me, though, was how much the sample description sounded like something you would encounter in an old text adventure. The 'inventor' seems to see this as a downside, wanting to coach people to put a little more humanity into their descriptions. I don't - think of the opportunities! You could set up *real world* text adventures, with players in helmet cameras able to see only a text description of what they were 'looking' at, but the freedom to look and move in all directions... well, carefully.
No comments:

There's so much going on, and so little that's in a good position to tell you about! (But if nothing else, jump down to the end of this and answer the question.)

Today's patch (1.0.32) replaces the slightly dull trophy room with custom icons for each achievement. Not a big deal, but it makes recording your progress a bit more fun and colorful.

Still waiting on title screen art before it can go into official beta. No one's at fault here, a bunch of unbelievable life craziness hit all three of the key participants in this project. 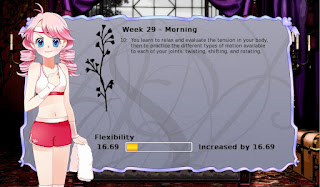 On the bright side the long delay got me to look at the way class results / skill increases are displayed, and make them more animated and less dull.

So far only one route has been completed... and that's the one featuring Mister Sparkly. 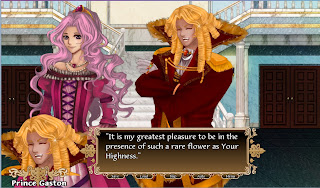 Lots more writing to do. There are at least three more full routes to go, with another still hovering in a 'maybe'.

I've also put a bit more work into game menus, giving them some simple animation and dressing up the load/save screen (haven't done options yet though.)

... doesn't actually have any information about it yet, other than to say that yes, I do think I'm going to try running it. Someone is working on a character sprite, and I will get together a rules post for approval probably next week when I'm less overworked.

And then, the question...

If I said I was working on a project called "Black Lily Veil", what would you expect it to be about?

(Just trying to see what associations this title would bring up in people's minds. I'm not actually working on that idea... yet.)
4 comments:

New interactive fiction website of some stripe
No comments:

I'm just borrowing this for a minute

Okay, no, I am shamelessly stealing this quote from a forum post, because LOL.

Probably as result of reading certain kinds of LPs on this forums i'm thinking next milestone should be a cross between unicorn breeding and otome game.

In which you're continually torn between lust for irresistible beautiful men and the need to remain forever alone, so your unicorns don't hate you.

I know nothing about this except that I saw an image from it on deviantart and then went and looked at the trailer video and went "wait what did I just see??"

So.. yeah. Surreal adventure/RPG, I guess?
No comments:

By that I mean, if you're fighting an intelligent monster who is capable of communicating with you, you should be able to, in at least some cases, demand and receive their surrender. And they should be able to choose to stay loyal to you or betray you based on some complicated mechanics.

Infinity games already allowed you to temporarily snag monsters and put them in your party - Charm Person and related spells. However, when the spell wears off, the lone goblin, despite being completely surrounded and massively outgunned by your party, suddenly goes hostile again and fights to the death. Well, that's silly!

What if you could beat down enemies into a state of surrender, take all their valuables, and release them, transforming them from red hostiles to blue neutrals?

What if you could press-gang random neutral NPCs, turning them into temporary green party members?

What if temporary party members had a chance of making a run for it when near an exit (thus disappearing from your control) or suddenly turning hostile on you if they thought they had a chance?

Imagine: Your party is ambushed by a bunch of bandits. You fight them, and one badly-injured one cowers and begs for his life, offering his thieving skills to you. You let him come along and are able to use him to pick a nearby lock. If you exit the zone, you lose him, as he's done his job and it's assumed that you released him. If you stay in the zone with him, you notice that items in party inventory keep mysteriously ending up in HIS inventory, unless you succeed in spotting his pickpocket roll, in which case he goes hostile again... If you *sleep* in the zone with him, your party wakes up as he lands the Backstab Triple Damage Sneak Attack on the idiot who fell asleep by him...

... And of course, a neutral who finds his way back to his still-hostile buddies might go hostile again and come back for revenge...
No comments:

Why would anyone even CARE?

So apparently there's some MMORPG in development that intends to try and give financial incentives to people who play characters of their own assigned sex. (You probably don't want to read the comments, they're pretty nasty.)

I just... WHY? What on earth is the point of this?

I'm trying not to invent and assign nasty motives because it's really not fair to assume without evidence, but... why should anyone, especially a game developer, care about how much the players in the game resemble their avatars?

I know why a very small number of players would be in favor of such a thing, because the comments make it pretty clear - there be some highly unpleasant individuals who are deeply disturbed by the idea that the ludicrously-jiggly breasts the developers have implemented for them to stare at (their only purpose, in their minds) might be under the control of a RIVAL MALE. (And a few others utterly despise trans people and are specifically happy at the idea of something that upsets them.) But surely the company behind a game should be above such bizarre and petty obsessions?

They can't even trade off the notion of an environment where people are strictly locked to the "correct" sex because they aren't at all trying to implement that. I don't get it.
3 comments: