Oops, I almost forgot about Rowan. That's... Kind of a common reaction. 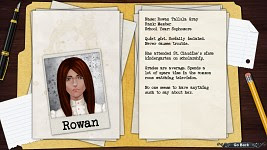 Naturally, she's the minion with the best starting Stealth score. And you desperately need someone who can carry out tasks without getting caught. Better hope she's really on your side!
No comments:

The Ingenue. The Pollyanna. The New Girl. And the shortest girl on the team. 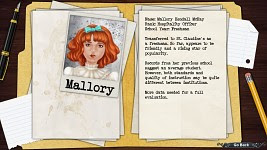 No surprise that Social is her top starting skill.
No comments:

Behind every great leader is an awesomely organised assistant. 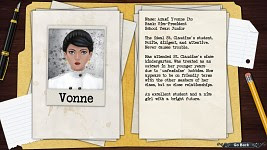 At least, as long as she's on your side and not secretly betraying you...
No comments: 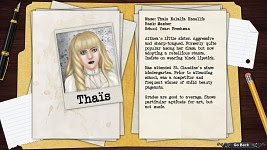 A spoiled brat prone to throwing temper tantrums, sure, but you have to expect there's more to her past that shell. One of the characters who's evolved the most in production.

In gameplay terms, she starts out with the best score in Intimidation so tends to get deployed when you need to rough someone up - er, convince them.
No comments:

No, I'm not playing it, I don't do consoles. However, some interesting elements came up in a review, so I'm going to muse on them even though I haven't played the game. If you're trying to avoid all spoilers, skedaddle.

The storyline involves a guy who dies on his wedding day and his wife trying to change the past to save him. It also happens that she has some kind of split-personality thing going on, so there are two of her with different skills that get switched back and forth between.

However... who, exactly, is the player meant to be empathising with? "Girl tries to save her man" sounds like you'd think she's meant to be the protagonist. Let's look at a few of the bits from the IGN review.


You will witness your own death at your wedding before traveling back in time with your wife-to-be in order to track down your killer!

So the sidebar seems to be going for "you're the guy".

However, the gameplay instructions seem clear that you are controlling Toki/Towa.

the flimsy dating-sim sequences, in which you assume control of her fiance/dragon

Reviews talk about him as a pervert trying to see multiple girls naked, so I have no idea if these "dating" sections are just interacting with the dual Toki/Towa, or if he's taking a break from his wife trying to save his life to run around and score with other babes.

Nonetheless, the inclusion of this element seems to make it pretty clear who they think the player REALLY is.

Batman games are not generally interspersed with sections where you play Silver St. Cloud trying to decide between the "Batman" and "Bruce Wayne" personas. (Should they be?)

Even the IGN reviewer, who was complaining about this perspective issue, slides a little bit in that direction:

What's more, which of the two you end up with boils down to one ultimate decision anyway, making the smaller ones you make along the way meaningless.

Who you're with. Not who you're playing.

Looking over on Kotaku, they mention that the rest of the cast is pretty much cute girls, and that:

Due to Zack's predicament (namely being trapped in the body of a baby dragon), he is relegated to a computer-controlled support role in battle, while the player fights monsters with gun, dagger, and magic as Toki or Towa. This is an interesting reversal of the normal knight/princess relationship, as it is Zack who must be protected.

Yet it is Zack who is the narrator and player proxy character, not Toki or Towa. He's the only character whose thoughts the player is allowed to hear, and the player is occasionally allowed to choose how he interacts with Toki and Towa as well. And while Zack is the butt of the occasional joke, it is his excellent dead-pan humor in the face of danger that makes him capable of carrying the story—even if he is a bit of a pervert at times.

Or is it an innovative female-protagonist adventure that got male-pandering elements jammed onto it for marketing reasons?

Or something else completely?

Will those people who scoff that a woman could not possibly be the one doing the saving even notice this thing exists? And if they do, what do they think of it? I can't exactly ask, since it's not like I'd know any of those people! 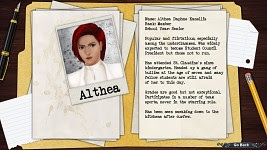 Like you, Althea is a senior, which means that you've had a lot of years of history together, and university looming on the horizon. If, that is, the school doesn't come crashing down in a scandal first.

Most elegant young ladies keep their love lives under wraps. Althea is unusual among St. Claudine's students in being openly a lesbian... and willing to play "prince" for girls who aren't quite sure what they want. She flirts with just about everyone, except you.

(And if you're familiar with a game character of the same name in development, it's a coincidence! Neither of us knew the other had such a character going, and they're not exactly similar.)
No comments: