There's another news post on indiedb talking about some of the most recent additions (with mild spoilers possible, so if you want to see the dungeons totally unspoiled, don't go there)

In general, while my being ill and the last dungeon being very complicated means we can't make our most optimistic targets, things are going nicely. There have been some big developments in the plot lately (cue players spluttering), the script writing is now in the last month of the story, and the art for the May Day Ball is starting to come in. I still can't get a proper lint count because my script is well ahead of what's actually been implemented, but we certainly passed 100,000 a while ago.

Since content-completion is near, the pre-order price will soon be going up again (to $19.95, out of the final price of $24.95) There will be discount opportunities after the game is final, but your best bet for a cheap price is to get in early!
No comments:

For all that Apple happily screens some people's products out of the App Store, they can also fail to notice really obviously problematic submissions...
No comments:

welcome to the sour future

Trouble with the playstation network lately...
No comments:

in memory of Jerry Lawson, who invented the first cartridge-based video game console, and died earlier this month.

This has inspired a bit of research on my part, as I wasn't born yet and don't know much about the pre-Atari consoles, and didn't entirely understand the difference between the Fairchild Channel F and the Magnavox Odyssey (which someone was WHINING about in the comments of said article as being REALLY the first console).

If I understand right, what it comes down to is that the Odyssey could play multiple games but the code for those games was present in the base hardware and the cards you put in only adjusted the options, setting which subset of features would be made available. That, combined with the picture the user manually attaches to the TV screen, creates the impression of different games while actually being quite limited in what you can do with it.

The Channel F, on the other hand, had programs on cartridges, and thus sufficiently weird people can write new games for it even today.
No comments:

Okay, up to the point where Babel changes form and had to pause to recharge the DS a bit more.

Is there any reason that the heads are different heads on different paths?

Edit: Last fight ended up a bit silly, as I wasn't really slotted for it, and it worked out that my main was pretty much invincible (barrier, phys repel, fire repel, and life boost after battles) but had very little offensive power, whereas the rest of my party couldn't keep themselves alive once the demons were gone. so I was stuck plinking pitifully away round after round with the only one alive.

Still, that's done with, and I probably won't go back for the other routes. I went with Gin (and ended up dumping Yuzu from my party and running him instead).
No comments:

so I have bashed my way back to the path decision point and FINALLY I have Atsuro and Gin's paths open.

now I have to make up my mind of which one to do because I am probably going to call it a day after that, and not bother chasing down the missing two (Whichever one I don't pick there, and Yuzu.)
No comments:

so sick of this

Apparently there was YET ANOTHER server problem causing DRM to make people's legally purchased single-player games not work. SIGH.
No comments:

Just DO IT
No comments:

Email ThisBlogThis!Share to TwitterShare to FacebookShare to Pinterest
Labels: Free

Poking around youtube leads me to information on another cute looking SNES game I'd never heard of...

Okay, that's the chaos path down, now to try and find a walkthrough that works correctly to give me the third option.
No comments:

The various Quest collections (Space/King's/Police) are on sale this weekend at Good Old Games.
No comments:

... I might be able to push my way through the Lucifer bonus battle if I tried hard enough, but I'm lazy, and anyway if I keep trying to get extra endings I'm likely to end up back here again with even more powerful minions in the future...
No comments:

Despite using a walkthrough, my second play attempt has ended up unlocking paths that were NOT the two paths I was trying to unlock. I was hoping to do either Gin or Atsuro, but have ended up with the choices of Kaido or Naoya? I need a better walkthrough for try 3, obviously. :)

Haven't DONE the final day yet, just gotten up to the emails about it.
No comments:

You might remember hearing it described as pokemon-meets-metroid (raising your own monster to do platform exploration with varied skills). You might also remember it as the game that fought hard to have a young, non-sexed-up female protagonist.

I'm a little oversubscribed at the moment, but it is on my list of things to pick up at some point. (And considering that the 3DS is region protected scum of evil and I can't buy one, my DS wishlist will doubtless get picked up over time.)
No comments:

the throne of bel

FINALLY oh good grief i do not have the faintest idea how many suspend-restart-reloads that took to pull off. my resources were terribly run down by the time the final boss appeared, I couldn't afford to play fair.

but as always there is some gleeful triumph in a hard-fought victory!
No comments:

Article on the BBC suggesting that, in a way, goldfarming is fairtrade.
No comments:

It appears that Spiky and I will be at Fanime peddling hard-copy games at the end of May. Which games depends on a few factors, like how much I can get done before the beginning of the month!
No comments:

a credit to her kind

Actually I was being silly and did have enough store credit to do the whole thing (cash)free* by making use of the other sellers. Now let's just hope it is indeed the NEW copy they advertised. :)


* - what is the proper term for buying things via store credit? 'Cash-free' might just suggest that I'm using plastic or something. It's not truly free, as the credit had to be earned, but it's an incidental bonus rather than something I worked towards.
No comments:

I have finally gotten far enough into the boss battle to actually reach the final boss's final form.

At least I think so.

Do I have a prayer of actually defeating it?

I really hope so, because it took a lot of mid-battle save-and-restore (allowed on the DS!) to get this far...
No comments:

I only had a split second to look at it because I'm busy but, well, you expect weird from that title, right? Retro pixely arcade-i-ness where you tie women up in your web and then grab them to score points? 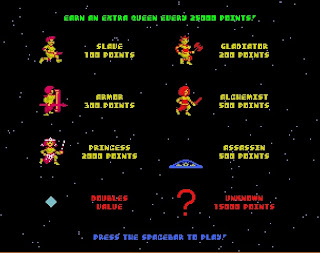 Not because I've really changed my opinion on the subject any - I have extremely low expectations of everything except elfsex (since, like, the entire world seems to think Merril is the best thing ever). But because Bioware is giving away Mass Effect 2 free to people who buy DA2.

You may remember that I've never played Mass Effect and have had about as much interest in the concept as I do in finding a dead snail on the sidewalk.

Yeah, but... free. And, well, if my major reluctance to both DA2 and ME in general is being worried that I won't enjoy it enough to be worth it, packing them in together at the same price to double the odds does kinda help. Also, my endless trickle of store credit (I don't have quite enough but I do have SOME) means that I ought to be getting both games for under $20 cash expense, which means I can claim that I'm buying DA2 for $10, which is how much I said I was willing to spend on it in the first place. Tortured logic much?

So I post this just so you can watch the twisty thought-processes of someone lured by a bargain on things she didn't really want.

I haven't done it yet though. I'm just... probably going to.
2 comments:

So one of the special Think Geek products is a portal to a hell dimension to throw your unwanted desk clutter into.

P says, "That would be great!"

G says, "... yes and no, you know you'd throw something in there and then want it back, and then you'd have to hire adventurers to go into the hell dimensions looking for your lost paperwork... Hey, that's an idea."

P says, "But think, when the IRS comes around to ask about your taxes, you can tell them that the documents are right through there."

G says, "Great, so now I have to send my adventurers through a hell dimension filled with angry IRS agents?"

P says, "I think you repeat yourself."
No comments:

happy "believe nothing on the internet" day

Now, for reading this post, you owe me a pony.