Things I have still shrinkwrapped, some of which are new today:

Yukkuri Panic Escalation - because I heard a spoiler about something that happens late in one of the routes that kind of creeped me out, and it's not really known for being plotty anyway, I just bought it as vague yuri support. I'm bound to at least test it one of these days... right?

Shikkoku no Sharnoth -What a Beautiful Tomorrow- - well, okay, the box isn't english, but there's a patch out, right? Althuogh I don't actually know if the patch patches this version. My hesitance on playing it is because from looking at an LP it looked a little hard to follow. I intend to get to it but only when I have time to focus, not when I'm looking for quick amusement. There may be Research Purposes involved.

Saya no Uta - Just got it, will probably look in Nov/Dec, have reasons for not getting into it now.

OtoBoku - I watched the beginning of the anime and it was boring, the art is not that good, and I don't know if I will ever play it but... well, now I have a box. I have at least some interest in the concept so I'll give it a chance eventually... On the other hand I don't entirely want to touch this while Black Closet is in development because I don't really want Japanese girls-school tropes slipping in among the ones I'm deriving from my own experiences.

If My Heart Had Wings - this is probably going to sit on my shelf forever. I'm not actually interested in any of the main concepts. I was just padding out an order.


Welcome to adulthood. We buy all the games and then we don't play them.


(Dear google - look how precipitously my posting dropped off when you insisted on changing everyone's Posting Experience. How about you stop screwing things up?)
No comments:

Yes, the PC / Student Council President is a fixed character, not a draw-your-own. Due to game design, though, you don't see much of her other than CGs. She does not have a side image or a minion card, she is the hand that HOLDS the cards. 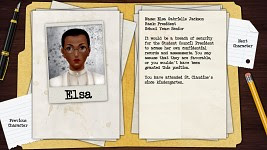 While her look and some of her basic personality is fixed, this is a game where every single time the protagonist speaks, you get to choose what she says, so there's still plenty of room to push things in your own direction.
1 comment: