This game is pretty awesome. It vaguely tempts me to work on a slightly vicious VN where the party is getting picked off one at a time (although for different reasons and in a much LESS nasty way than happens here.)

The game is Japanese-only, so most of us can only sit here reading the Let's Play. Which is still awesome!
1 comment:

I have no interest in being sucked into 'free' worlds that want me to part with my sanity and eventually upgrade my experience with nickels and dimes.

But I have to say, the little preview animation for the new Doctor Who game is rather adorable.
No comments:

At last, we have a few clothing items finished so I can show you a picture of the princess for our ruling sim Long Live The Queen! 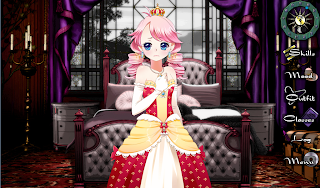 She's not always that sad, of course, her mood changes based on events and the activities the player chooses. But she does start off sad, since after all, a tragedy in the family has just happened in order for her to be put on the throne at such a young age.

Elodie's mood affects how she learns skills - she's eager to learn Conversation skills when she's Lonely, but terrible at handling Weapons when she's Afraid. You'll have to manage her emotions in order to maximise skill gain.

This is not a huge sprawling epic with heavy character interaction or an RPG; it's a number-crunching sim where things will probably go terribly wrong on your first few playthroughs, so just keep trying until you manage something resembling happily ever after :)

For the latest news on when this game will be released, sign up for the newsletter at my main website.
4 comments:

Still working on the princess simulator (she's absolutely adorable, but none of her clothing sets are finished yet and I really shouldn't post her naked)

here you can see my ongoing war with GUI: 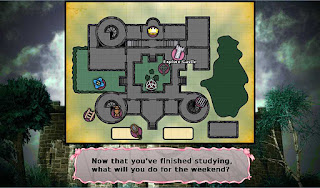 No, the Red Cross is not trying to arrest you

Sometimes people really make me angry. Like the people intentionally spreading the lie that the Red Cross intends to prosecute everyone who's ever played a video game for "virtual war crimes".

If you people would read the whole bloody article instead of the headlines written by lazy lying journalist scum you would see that there was never any suggestion that the Red Cross was going to go after gamers. The headliners made that up.

What the Red Cross did want to investigate was whether actions taken in games normalise activities that would be war crimes in real life, and whether game developers have a moral responsibility to accurately depict and enforce the real-life rules of conduct.

This is hardly a new issue - there are always debates about whether games that allow players to behave in a blatantly illegal fashion without repercussions are a detriment to society. And really, it's probably even *more* the case in war games. Most people playing Grand Theft Auto are aware that stealing cars is illegal in real life - but your average player probably doesn't actually know what is and isn't considered legal in a warzone. Would we have fewer problems with our troops if these rules were told them as kids playing games?

Naturally, there are many many ways to represent a legal structure in games, and they do NOT all require censorship or arresting players or anything ridiculous like that.

The saddest thing is seeing lots of followup comments on these idiotic lying articles about how people claim they are going to cancel their donations to the Red Cross because of "gamer persecution". Sigh.
No comments:

After having finished my playthrough of the first Baldur's Gate, I have had the vague intention of trying another run on BG2 with some things I hadn't done before - trying to alter class (I don't think i've ever played a cleric as my main) and attempting the infamous Imoen Romance Mod.

I was surprised and perturbed by discovering this thread (SPOILERS!!! As is this post!!!) in which a number of male players protested that they were shocked and confused when Imoen confessed to them that she had always thought she was a lesbian until she fell for $MalePC. That this was so jarring and upsetting that it should be excised entirely from the male path.

So, right. You're a part-demon who is attempting to sleep with your half-sister... and the thing that ruins it all for you is that she is so attracted to you that it overwhelms her love for boobs?

(Interestingly, no one dared suggest that the lesbian option shouldn't exist for players who wanted it. Just that the Imoen THEY wanted to sleep with should not be in any way gay.)

And here I thought "turning a lesbian straight" was supposed to be a popular dumb fantasy... (But then, people are far from homogenous, obviously.)

On the other hand, it seems that someone has finally finished a Haer'Dalis mod, which might tempt me in a different direction... (Although that also sort of makes me want to resurrect the evil female mage I played who I *did* ship with HD way back when...)
No comments:

So, here's an entirely different sort of "visual novel" - it's an experience that consists entirely of wandering around incredibly gorgeous detailed settings while hearing fragments of a story.

Is it a game? Well, there's been a lot of debate about that recently.

The story changes on repeated playthroughs, but as I understand it, which bits you get are random rather than the result of player choice. If you enjoy mood pieces and kinetic novels (and aren't wedded to anime style) you might find this interesting.
No comments:

Despite posting very little lately, I have actually been playing an awful lot of games in the past couple of weeks.

It's just that many of them aren't things I can really talk about yet. :)

Well, there's To The Moon, which is more or less a kinetic novel in RPG format. (There are some minor puzzles and you have to poke around a little to keep the story progressing, but it is ALL about reading the story.)

Sentimental drama with humor interspersed (after all, you need the contrast to feel the sad bits). If you are cool with reading a story in videogame format, you should like this. Also, it has a well-designed original soundtrack. Lots more information and trailer videos available at the official website.

Also played through a little lovecraft fangame - it's too short to really recommend it unless you're a massive fan of the style, since like many such stories it mostly boils down to "Some weird stuff happened once but was it real???", which isn't really a plot that will live in your mind forever. :) Still, it has some nice touches for atmosphere at times. More resources would obviously help, but is there anyone that isn't true for?

Lacked the time to actually play it, but became aware of Alarys Complex, an RPG in development that is *not* RPGMaker, but is trying very hard to look like it is. Has some interesting ideas about conversational choice/presentation and working with "ambient" text. Game has been under development for a long time apparently and has a big pile of words in it; it's not out, but there is a public demo.

Can't really update you on my own development either, due to the ever-present problem of other people being busy. *taps email impatiently*
No comments: