The full Space Quest Collection is on Daily Deal on Steam.

It's certainly a decent price.

But I have a huge backlog. And I've already played almost all of those games anyway.

And I've never bought from Steam.

Enh. If this were next week, there'd be a chance I might give in. As it is I think I'll pass.
No comments:

A lot of us indie types don't talk sales figures much, for a lot of reasons - mostly because it immediately opens you up to a bunch of pointless heckling and comparisons and judgments by people who don't really know what they're talking about.

However, talking about sales of games at a particular event may be useful to those of you thinking about having a booth of your own in an artist alley, so hey. Why not? (However, I'm just back, tired, and still have a cold. My numbers may not be 100% accurate.)

Cute Knight Kingdom: 16 - sold out of full boxes (we brought fewer of this game) and went into half-price misprints.

Long Live The Queen (debut): 31 copies, total sellout and a couple of disappointed people who came back too late. Should have brought more!

Why less for Date Warp than the others? My guess is that while it's one of the higher-priced items on the table, it's also been available at more cons than any other game (so lots of con-going people have it already) and the new box design isn't as cool as the old CD-shaped box (and the covers didn't print as well).

I was surprised that people were happy to buy the $5 CKK misprint discs when there was no box, thus no screenshots and no clue except my vague explanation of what kind of game it even was. But, well, bargain!
3 comments:

so I heard your DRM sucks

I decided a long time ago that I wasn't going to buy Diablo 3 due to the always-online stuff, and therefore quit paying any attention to it. I've simply filtered out most discussion of the subject in the same way I ignore conversations about World of Warcraft or the latest Playstation 3 title: Not Relevant.

I'm now seeing comments in forums that despite all the security, Diablo 3 has already been hacked.

So what was the point?

(However, looking at the article I was sent, it sounds more like account theft in the WOW sense than DRM cracking. Not that this is much help to the person whose account gets stolen, rendering their paid-for game even more junk than it was to begin with.)
1 comment:

Why not? ... aside from the fact that TOO MANY GAMES TO MAKE

The image in my mind is no the image in your mind, I don't think, but it is WEIRD and has potential for WEIRD USES. Gloomy people walking through city skyscraper streets with their emotions manifesting as little black battleships around their heads, engaged in some sort of ongoing war This is a neat visual but #%@ if I know how to make use of it in anything. ... I suppose you could have a 3d walkaround mode where you SEE people trapped in their glooms, and then you enter retro shooter mode to defeat their psyches?ACK STOP DESIGNING GAMES
1 comment:

A little VN newly released in English, but with no demo available. What's a player to do? I haven't had time to go through the whole game yet, but I did buy a copy so that I can give you a little bit more information on this game.

In some ways, it feels more like a socially-fixated high-end RPG Maker game than a visual novel. That isn't entirely a bad thing, though, as it is cute as a button. 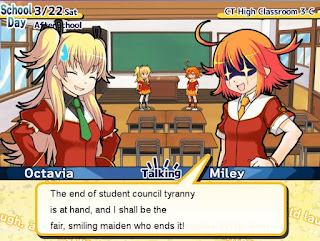 You play Miley Verisse, an orange-haired tornado with a tendency to crack jokes every few words, as she tries to gather enough victims recruits to form an official new school club. Problem is, she's only got about a month to do it, and by school rules people can only be part of one club at a time (and most of them already are, or aren't because they hate clubs). So she's going to have to be ridiculously outgoing and use all her charms to try and win over the available girls and guys. To do that, she has to level up her social skills and Topics Of Conversation.

So you go around seeing movies, reading magazines, and watching TV in order to find things to talk about and help you make friends.

It's the interface and especially the control scheme that make this feel more like a console RPG. You have cute animated sprites and they move around and interact with each other. No mouse controls - you'll need the arrow keys and space/enter. When walking around, you can talk to people by walking over them and pressing space. You can also 'run' by holding down space while you move.

Menus will talk about pressing 'OK' and 'Cancel' without actually telling you what those keys are. Space/Enter/C will work for OK. For 'Cancel' type options, press X.

Saving the game you can only do in the evenings by talking to your roommate Harriet. She's your own personal save point and sidekick!

There is no demo for this game, but it's also only $8, so if it sounds like fun it's not much to gamble. You can buy it here.

I may post about it more later if I get back to it, but I am crazy busy (and the no-mouse thing is *slightly* annoying, but I know some people don't care as much.) This is pretty much just to give you the information you would get from the non-existent demo.

as seen on the steam forums

Her? As in it was written by a woman? I see... Hm, on second thoughts maybe I'll just skip this title.

It looked good like a good game, but it's not really a game or at least not what I would define as a game.

I'm glad I decided to ask here on the Forums instead of buying on impulse, saved myself a few pounds and a subsequent rage post expressing my dissatisfaction.

Warlock - Master of the Arcane is coming out on the 8th, think I'll just get it when it comes out.

Anyway, a big thanks to everyone for informing me about this game, especially those who dropped that the writer was a female.

Now, obviously, this is just one person, and the post got a lot of "WTF???" followups. I am not claiming that all or even most gamers are like this.

Person tried to justify that most books written by women don't resonate with em. Which is a reasonable preference to have; I find that female authors on average click better with me than male ones do. However, I still read things by male authors - and some of them have exactly the same characteristics I like in my female authors. Because all men are not the same!
2 comments: