Emptying out my card holder

Just going to pile up and list some of the business cards and sites I've been picking up while doing the convention circuit this year!

KMKdesigns - steampunk/goth/lolita fashion, will do large sizes and custom designs

Alienphant - fashion/accessories with spikes and tentacles. the sweet lolita tentacle print is too cute!

The League of Proper Villains - Honestly I couldn't tell what these guys were on about. Steampunk. Something. But they insisted I take a card or face dire consequences.

Dr Brassy - Steampunk jewelry that involves eyes. (I have a thing for eyes.)

Back to Earth Creations - jewelrystuff

Plus some cards for porny things you probably don't need to hear about, although some of you might be interested in the link to the yaoi comic that I swear I don't even remember visiting the booth of...
No comments:

Email ThisBlogThis!Share to TwitterShare to FacebookShare to Pinterest
Labels: Art

For the fun of it, I'm building a curation list of games on Steam with lesbian content.

If you know of any I've missed or want to correct any of my information there please leave me a note!
1 comment:

Interested in some different approaches to narrative in video games? Check out this week's Humble Weekly Bundle, which is dedicated to female protagonists (sort of) and features adventure games and stat-sim/VN style games as well. 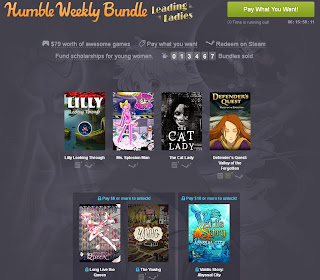 Why 'sort of'? Well, The Yawhg lets you choose an avatar, so it's not necessarily female or a focused, detailed character, and Valdis Story (may possibly? I've heard conflicting reports) only lets you unlock a playable female character after you've beaten the game once. Details, details... but I try to be clear with you!

Since I don't have time to actually code this idea right now to make it play and see how it works, a slightly longer description of what I had in mind: not so much dancing as mingling, with the intent of trying to gain social influence with all sorts of factions.

So, you're in a big reception room / ballroom. There are many guests. You want to get to the important people to schmooze with them but it's crowded and there are many people in the way, so you'll have to encounter and defeat other folks as you run into them. There are many approaches you can use to try and defeat someone, from flirting to impressing them with your knowledge to 'accidentally' bumping into them and denouncing them for it, and a lot of this would depend on skillchecks.

If you lose the battle you have to withdraw from the ballroom for the week. If you win then your opponent gets out of your way, adjusts your influence with their faction (like XP - important people will give you a lot more influence for beating them) and, if you're lucky, gives you a present. (LOOT!) And then you can move on to the next fight.

This would therefore allow for all the trappings of turn-based RPG combat but in a social situation rather than a cutting-off-heads situation, since a ruling-focused LLTQ-type game can't really have the heir wandering off into dungeons. :)
No comments:

For the Steam release, I commissioned a bunch of extra art to create trading cards and wallpaper. However, you shouldn't have to be a Steam user just to see the new pictures! Here's one of the new collectible graphics for Date Warp:

Lost in time and space - can you find the way out?

After many delays, the new version of our sci-fi adventure Date Warp is finally available on steam, now with new science UI and additional bonus content! (Plus, of course, achievements and collectible Steam trading cards.)

Check it out now - for science!