This came up on another forum but seemed sufficiently relevant to some interests that I thought I'd repost it.

While there are a number of games originally designed for the cellphone market and a few ports, the ports are often buggy, and there are few games really designed to work well on tablets. (Technically we have a tablet version of Magical Diary but only for a really obscure tablet that nobody has.)

For people wanting to play more visual novels on tablets, this was suggested:

While as discussed above there isn't much in the way of VN's for table devices ( besides an x86 win8 tablet )
I have discovered an alternate way of playing VN's on my Ipad. I use an app called Splashtop Streamer
( http://www.splashtop.com/splashtop2 ) Essentially it's a $5 remote access app for iOS, Android (and Mac and
PC I think) It allows you to access your computer and run programs on your Mac or PC from anywhere you have an internet connection. So far I haven't had much problem using it to stream VN's to my iPad, sometimes it is necessary to screw around with the display resolution as Splashtop doesn't like full screen programs. All that being said, VN's on the iPad's retina display are bloody gorgeous.

There however are a few cons
1. It eats up my Ipad's battery life.
2. Since it's essentially a video stream that CAN'T really buffer ahead, there is the occasional hiccup where sound cuts out and stops reading inputs ( however given the static nature of VN's it isn't really a problem)
3. A little stuttery on 3g/4g
4. People give you weird looks if you're playing an 18+ scene and are in a public place.


(Not a personal recommendation on my part, I do not own an ipad and do not have any relationship with the app in question, I just thought some folks might be interested.)
1 comment:

I've only had this game for like a day or two and I'm probably going to have maxed out all stars within the week I can't help it I love Kirby.

It does seem a little on the easy side even for a Kirby game but who cares, KIRBY.

(It's Squeak Squad I'm playing at the moment.)
No comments:

once they're hooked you can change the rules

Pondering game mechanics for RPGs I will never write.

So, you start off as PUNY FIRST LEVEL SCUM struggling your way through deadly dungeons. Only there are these wonderful magic potions you can use which temporarily boost your effective level. And they stack. Take a few of these and suddenly you're super-powered and can slaughter the opposition.

Of course, they have limited duration... and while you're boosted, you don't earn XP.

But that's okay! You don't need XP when you've got power potions! As long as you can kill stuff fast enough to earn enough gold to buy more potions, everything is fine!

... until you get later in the game and somebody achieves a stranglehold on the power potion supply. Now, if you want more, you're going to have to work for us... or else you're going to find yourself in big trouble up against the monsters in the current level of the game.

Sure, it'll get eyerolls as an obvious drug metaphor, but the point is that it ties in gameplay mechanics and story consequences without having to railroad or make a huge ooga-booga moral posture about it. And it doesn't have to be a drug metaphor - ANY sort of reliance comes with weaknesses. Your DRM could turn on you. Your publisher could drop you. Your job could fire you. Windows could release a new OS that doesn't allow games to run.

If you've planned ahead, carefully balanced your resources, and not relied too heavily on the power potions, you may have levelled up for real and still have a supply handy to take on the final boss.

If you've planned ahead, the company layoffs hopefully won't leave you at a complete loose end.

If you're relying on one thing only, then all anyone has to do to control you is to control that one thing.
No comments:

So, Zynga is shutting down bunches more games I've never played but some hooked players care a lot about and Sony is working on a patent to ensure that your game discs will work once and only once and after that you have to buy them again.

People. PLEASE. Buy games from us nice developers who don't believe in DRM and don't let this sort of nonsense take over the industry! Buy games that you can keep!

So I threw together a little bit of a webpage for The Royal Trap - don't get excited, though, most of it just says "Coming Soon"

I should work on getting a better recording of the opening video so I can fill in the trailer entry on there properly.

Still about 6.5 CGs still to go, and since they're coming in at one a week, that should let you estimate how long it'll be before the first sales can start.
No comments:

Since it's the new year, I suppose I should give a small sample of what I'm working on. 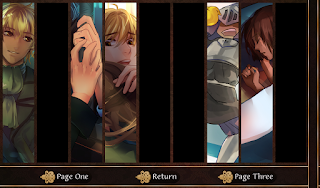 Still adding CGs to The Royal Trap. I should probably make an official page for it soon. I haven't touched the story in quite a while, just waiting for all the art to come in so I can put together the beta-purchase version, hopefully in February.

Otherwise, working on the weird secret project I've mentioned occasionally, the one that really isn't a VN and doesn't entirely fit into any established category. It's... a social-battle mystery-solving card game with side romances? And, since I felt it was about time I did one, it is entirely yuri. You can play them as friends if you want, but there's no boys in this game. 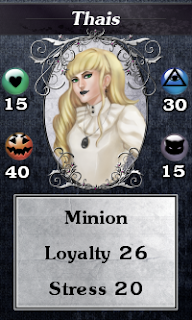 That is NOT FINAL ART!!! it's just a little mockup I put together to demonstrate some of the current ideas.

And as I've admitted elsewhere... I need to find a new artist (or small studio preferably), throw out what little was done, and start over on Magical Diary: Wolf Hall. Stating this in public will hopefully give me the guts to go through with it!
1 comment: