About 4 hours in so far. It's a cute, well-made adventure game, the puzzles MOSTLY make sense and the least fair one at least has an option to skip it. (It would be fair in an old-school game, but it's very out of keeping with the modern style.) 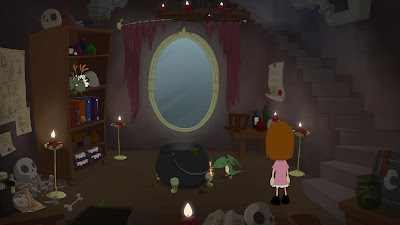 The main problem I have with it so far is that it's cute and pleasant but the story isn't very compelling. Anna's bland and sweet and a little dim, leading to repeated sections where you have to watch her give away important magical items to people who are obviously evil. Her motivation 'save grandpa' is noble enough, but their relationship is kind of generic? There are hints of a bigger backstory and some characters being connected but again no real reason to care about those characters and their connections. There's nobody in the game that I'm thinking "Gosh, I want to know more about X". I don't even hate the baddies enough to want to show them up.

It's nice enough and fun to play but once I stop playing it I don't have a huge urge to get back to it.